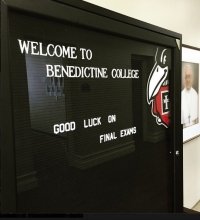 Today’s readings (the Sixth Sunday of Easter, Year B), which come during Finals Week at Benedictine College, can help us unlearn a disastrous lesson: They can help us stop thinking of our life as school.

School takes up a huge portion of our childhood and early adulthood and so becomes a dominant metaphor in our life. We talk about “scoring points” and “making the grade” and call serious mistakes “fails.”

But the school metaphor doesn’t work in the Christian life. We could never score enough points to “make the grade” of eternal life — it isn’t possible.

The family is a better metaphor. We are in the family of God through love. We are “begotten” in it, says the first reading:

“Everyone who loves is begotten by God and knows God. Whoever is without love does not know God, for God is love.”

Knowing that we are in God’s family clarifies our relationship and our responsibilities. The minimum requirement is to keep the commandments. “If you keep my commandments, you will remain in my love, just as I have kept my Father’s commandments and remain in his love,” says Jesus. Keeping the commandments keeps you in the family.

But then Jesus gives a greater commandment, a greater responsibility: “This is my commandment: Love one another as I love you.”

While studying abroad in England and doing parish visitations with the Legion of Mary, I met a devout Catholic man from India. He said he had only returned to the full practice of his faith five years before, and he explained why.

“I was in my apartment when I had a heart attack,” he said. “My wife called an ambulance, and it came right away, but I was very afraid.”

On the way to the hospital, he was gripped with a terrible fear of death. He had always meant to return to his faith. But he never really had. What would happen now? He had let God down. How would he be judged?

Then, suddenly, he was overwhelmed by a feeling of calm as a voice said to him, inwardly, “It is not your love for me, but my love for you that matters.”

He heard the words of the First Letter of John — but he heard them from God’s perspective. That changed his life.

God’s family is like a human family, he learned. Brothers and sisters love one another the way their parents love them: not for the sake of personal gain or out of fear of punishment or as a difficult “duty” that they have to fulfill, but because that is what families do.

In the family of God, it is no different.

Another thing about that story: It involved me, a half-Mexican American citizen in Great Britain speaking to a man who lived there who was born in India.

Jesus says the same thing in today’s Gospel to people all over the world: “It is not you who chose me, but I who chose you.”

In the Old Testament, that phrase would have been taken to mean simply that the Jews were the “chosen people.” But in our first reading from Acts, God started choosing Gentiles, too.

Many Jewish Christians didn’t like that. They found it odd to be sharing “their” religion with the likes of Cornelius and his family.

But that’s how the Church is supposed to be — growing around the world. It still is.

By 2050, China is expected to be the nation with the largest Christian population. God is choosing more people to be part of “our” Christian family. This shouldn’t alarm us. In fact, it should encourage us.

God loves us all, and it is only his love that matters.