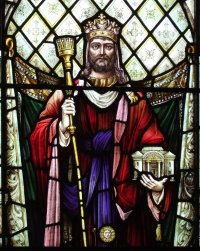 This Sunday’s readings (the 28th Sunday in ordinary time Year B) start by praising the virtue of Wisdom and finish by pointing out that it is insufficient.

The words of praise for wisdom in the first reading are taken from the book of Wisdom which is sometimes called “The Wisdom of Solomon.” When Solomon was granted any wish, he chose wisdom and the first book of Kings calls him the wisest human being ever. But ultimately it was not enough. Solomon died disgraced, having rejected God and fallen into idolatry and immoral relationships.

His life shows that wisdom isn’t enough to make us moral.

It’s a great start — by it we know the difference between right and wrong, and we are able to apply the commandments to every situation. We can better discern the good.

But to act on the good, we need to choose the good, not just know it.

So — if not wisdom, is willpower enough to make one good?

That’s the question the Gospel addresses.

The rich young man approaches Christ, and we get the impression that he has both wisdom and the determination to improve himself. He is wise in that he knows the commandments, and knows that Christ is the right person to approach about them. He says he has followed the commandments, too, and Christ seems to agree that he has.

But then Jesus tells him “You are lacking in one thing. Go, sell what you have, and give to the poor and you will have treasure in heaven; then come, follow me.”

To be fully human, we must also have a committed relationship with Jesus Christ.

We must put God above all lesser things. After the incarnation, that means we must devote ourselves to God through the person of Jesus Christ.

What was the “one thing” the young man was lacking? It was the same thing Solomon the wise was lacking: love — friendship with Christ, service to others.

As Pope Francis put it in Philadelphia,  “A Christianity which ‘does’ little in practice, while incessantly ‘explaining’ its teachings, is dangerously unbalanced.”

Yet today’s readings aren’t meant to preach against wisdom, or knowledge, or faith. The second reading, from Hebrews, makes that clear in its praise of the knowledge of Scripture: “The word of God is living and effective, sharper than any two-edged sword, penetrating even between soul and spirit, joints and marrow, and able to discern reflections and thoughts of the heart.”

No, the point of today’s readings isn’t that both wisdom and love are needed.

The Church has plenty of counter-examples to offer to the wise men in today’s readings.

My favorite is St. Jerome, the famed scholar who translated the Bible. But he took more than a year away from his important work when a natural disaster flooded his region with refugees. Instead, he served those people. “Today we must translate the precepts of the Scriptures into deeds,” he said. “Instead of speaking saintly words, we must act them.”

The word of God had the effect on him St. Paul said it would. He is not satisfied with wisdom; he will settle for nothing less than love.