Reasons to Swear (and Reasons Not To) 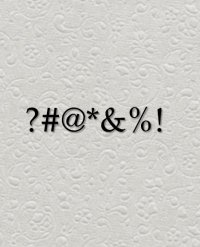 Is it just me, or is profanity suddenly showing up where it never did before?

Watch American Sniper, and there it is in the private, loving conversations between husband and wife. Read Facebook discussions of Catholic apologetics, and there it is again: F-bombs, S-words, and more, from the keyboards of church-types. I am used to overhearing it at work or at the grocery store … but only recently have I heard it on the parish steps.

There must be some good reasons for it. I thought of a few …

1. Profanity makes clear we aren’t “holier than thou.”

There was an interesting debate at National Review Online about Mike Huckabee’s recent public worries about profanity. Katherine Timpf argued that by fussing over profanity, religious people make themselves seem hopelessly out of touch and judgmental — exactly what people dislike about them.

I agree. My wife and I home-school our children, and we are always haunted by the image a fellow home-schooling mother shared of a 13-year-old boy horrified because he heard another boy say “stupid.” We don’t want our children to have that kind of inability to relate to today’s world.

When we’re screening a movie at “KidsInMind.com” you will hear me tell my wife, “Yep, this movie’s fine. Just profanity.” We remind the kids that we don’t talk that way, but some people do.

And if my children rush to judgment of someone because of the words they use, I remind them that bad words do not equal a bad person. I tell them about my Spanish-born grandfather, a lover of literature and liturgical music who introduced me to Chesterton, Newman and Belloc — and swore like a sailor, in several languages.

2. Profanity is the best, vernacular way to expresses certain emotions.

If we are called to speak the language of the day, and we are, then we cannot limit ourselves to the nice words we use in church. Occasionally a stronger word will be necessary to capture an emotion.

You see this in the way some church-types will say “frickin’” or “freaking” as an adjective (full disclosure: I am that guy). This can even serve a higher purpose, if you replace the sacred words some use as profanity with truly profane words. Perhaps this is the “strong language apostolate” that St. Josemaria Escriva wrote about?

3. It actually helps you feel a little better when you drop something on your foot.

But ultimately, there are even more compelling reasons not to swear.

Much of the profanity we use is in reality a way of summing someone up in a dehumanizing way. It’s the opposite of charity.

Jesus warned about this: “[W]hoever says to his brother, ‘Raqa,’ will be answerable to the Sanhedrin, and whoever says, ‘You fool,’ will be liable to fiery Gehenna.”.

Christians are supposed to be God’s love in the world. When we curse someone we are assessing them as worthless and wishing evil on them — the opposite of love.

And angry profanity isn’t the only problem — some listeners (though certainly not all) will feel disrespected by our use of profanity: They may feel that it signals that they don’t rate our best behavior.

2. There is always a better word.

I was out with a friend and his father as a kid when we overheard people swearing. I can hear his wise dad’s words to this day, in his Mexican accent: “Swearing is so lazy. They just don’t want to find the right word for what they want to say.”

And it’s true. I have accepted his challenge throughout my life. If I want to sum up an angry parking lot attendant’s behavior, a one-word anatomical reference really says nothing at all about what happened. Saying that the person was “aggressively bitter” starts to explain it a little better.

I have even noticed that the more descriptive and honest I become, the harder it is to insult the person. Ultimately, the person was not an “a-hole” so much as a “deeply wounded soul, unable to cope with the difficult circumstances of life.” Which is no fun at all to say.

3. Profanity carries a worldview with it.

The “N-word” is the new “F-word” — the Terrible Word You Must Never Say — and I think the reasons for that are worth exploring. The N-word is hated and reviled because it carries a whole worldview with it: A world in which black lives matter less than others.

That is why I hate the F-word. It carries a worldview with it, too: One that makes human sexuality something less than what it is, making it a coarse, ugly thing instead of preserving the mystery and power that discretion honors in it.

4. Because the Bible says not to.

The Second Commandment forbids using holy words in profane ways. St. Paul goes further. “No foul language should come out of your mouths,” says the Letter to Ephesians, “but only such as is good for needed edification, that it may impart grace to those who hear.”

Ultimately, that’s good enough for me. Some people use those words, and that’s okay, but we don’t.