Religious Freedom in the 2016 Election 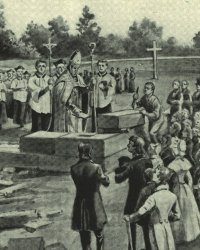 As the political storm intensifies and churns, and in the wake of Pope Francis’s message of the importance of religious freedom in America, more and more people are starting to consider religious liberty an important factor in their choice of presidential candidate.

We looked at what candidates Donald Trump, Ben Carson, Marco Rubio, Carly Fiorina, Jeb Bush, Hillary Clinton, and Bernie Sanders have said about religious freedom in the past few months.

Trump said in an interview that while meeting with national security experts, he “learned that if you’re a Christian living in Syria, you can’t come into this country … We have Christians being beheaded all over the world by ISIS, in Syria and Iraq in particular, and those Christians can’t come into this country. And that’s a lack of respect for us … The Christians are being treated horribly because we have no one to represent the Christians. Believe me, if I run and I win, I will be the greatest representative that they’ve had in a long time.”

In his latest book, One Nation: What We Can All Do to Save America’s Future, Carson writes, “Whether or not one likes Christianity or any other religion is not the point. Our Constitutional Bill of Rights states that ‘Congress can make no law respecting an establishment of religion, or prohibiting the free exercise thereof.’ In other words, our government should not support particular denominations or religious groups, but neither should it prevent anyone from expressing their religion.”

Rubio was instrumental in introducing the U.S. Commission on International Religious Freedom Reauthorization Act to Congress, which was passed in late September. Of the Act, Rubio said, “Religious freedom is under assault globally. Attacks on houses of worship, imprisonment and even death are daily realities for people of faith around the world. This is especially true for religious minorities in the Middle East who are facing genocidal onslaught. The Commission has been a steadfast champion of this ‘first freedom’ and a reliable voice for the oppressed and marginalized.”

In an editorial he wrote for CNN just before the Pope’s visit to America and Cuba, Rubio reemphasized his sentiment: “Religious freedom is often referred to as America’s first freedom. Our country was founded by religious exiles and built on the belief that God has given all people certain inalienable rights. Government’s role in society is to protect these rights and ensure that we are safe from religious persecution and discrimination.”

She repeated her opinion in an interview with CNS News, saying, “I think that we must protect religious freedom with great passion and be willing to expend a lot of political capital to do so now, because it’s clear religious freedom is under assault in many, many ways.”

Speaking at the 2015 Faith and Freedom Coalition’s Road to Majority Conference, Bush said, “My belief is that religious freedom is now under attack in ways that we’ve never seen before. Whether it’s the Obama Administration, or just the general culture, it’s important for us to recognize it’s been a rough year for religious charities and their right of conscience in this country. There seems to be an attitude that when the prevailing government policy runs head-long into views of the faithful, the faithful must yield. I’m reminded of something Senator Clinton said, that when people that have religious beliefs run into conflict with the woman’s right to choose, for example, the people that have religious conscience have to get over it, have to take a step back. Well, in a big, diverse country, we need to make sure we protect the right not just of having religious views but the right of acting on those views. Religious conscience is one of the first freedoms of our country … I’m betting that when it comes to doing the right and good thing, the Little Sisters of the Poor know better than the regulators of the department of Health and Human Services” Bush concluded with, “Christians around the world now are being targeted. As we pull back, and we don’t stand up for religious freedom, then we see what happens,” referring to ISIS and extremists.

Clinton hasn’t spoken about religious freedom much, but she addressed the issue last week, briefly, to the Human Rights Campaign, the largest LGBT activist group, when she said that people are “denying service to LGBT customers under the guise of religious freedom.”

Sanders likewise has not spoken much on the subject, but he did fight against Hobby Lobby in their Supreme Court case, and he stated that he believed the Indiana Religious Freedom law to be “a license to discriminate.”

There are a lot of things to consider when choosing who to vote for – the defense and active promotion of religious liberty should be one of them.

While you’re considering who to support in the upcoming election, join the Memorare Army and let your prayers help religious freedom until your vote can next year.