Remembering Fr. Gerard, a Kansas Shepherd With the ‘Odor of the Sheep’ 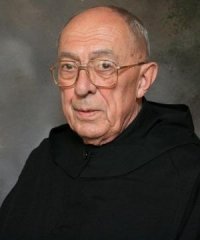 Editor’s Note: A Mass of Christian Burial is scheduled Monday, Jan. 26, at 10:30 in St. Benedict’s Abbey for Fr. Gerard Senecal, who served as a professor and president of Benedictine College before becoming pastor of St. Benedict Parish. We present the following reflection on his life by a parishioner.

“He gave a shepherd’s care to his restless and unruly flock” (Benedict’s Rule, Ch. 2)

The love of Christ is the Gospel message, but what does it look like walking around in a clerical collar? Fr. Gerard was far from perfect. He showed me the love of God, but he didn’t say it with valentines. The tough, gruff, irascible quality which endeared him to me didn’t always have universal appeal. But he was a working shepherd for a working world. He had true pastoral grit, a characteristic best defined in Pope Francis’ memorable plea: “This I ask you: be shepherds, with the ‘odor of the sheep,’ make it real, as shepherds among your flock, fishers of men.” (Pope Francis, Homily at Chrism Mass, 2013)

Fr. Gerard wasn’t given to emotional displays; his affection was more of the handshake than hug variety. A notable exception was the 6/23/13 reception celebrating his many years of service to the parishes and community of Atchison. When his name was revealed on the gymnasium wall, dedicating it in his honor, Fr. Gerard was decidedly misty eyed. He fought for the school’s survival with spirit and tenacity; nothing moved him as much as the knowledge that his efforts were appreciated by his people. His smiles that day were infectious.

Fr. Gerard’s photos reflect his priorities — they are concrete witnesses of sacramental life. He loved pictures of baptisms the most, and he risked life and limb to take them, standing on a rickety step stool which he stored by the sanctuary wall. He would mount the steps, vestments and all, urging everyone together for a group photograph; the more faces in the camera lens the happier he was. Parents always enjoyed the follow-up visit, when he would arrive at the door, probably unannounced, to present his photos of the happy event.

Is there anyone in the parish who doesn’t remember when the thrift store moved to its new location? To this day, when you say the words “Sacred Heart Variety Store” to a daily mass attendee, they immediately respond with “and More!” The Sacred Heart Variety Store (and More!) burst from Fr. Gerard’s imagination like Athena from the head of Zeus. He dreamed it, lobbied for it, funded it, badgered us about it, and prayed up a storm. We prayed for its volunteers, its donations, its success; I even remember one prayer which mentioned its address! Fr. Gerard’s plan of action was simple: work hard, and then pray hard enough to crash heaven’s server with your petitions.

Fr. Gerard loved music; he sang at every Mass, was a strong supporter of the St. Benedict’s Parish choir, and had real appreciation for the place of music in the liturgy. One of the most wholehearted compliments I ever heard him give was about Alicia Brozovich, the music director. We were chatting on the porch steps one Sunday when he nudged me and nodded towards Alicia, saying (in what I’m sure he thought was a subtle whisper) “that girl’s doing one heck of a job!” He loved the simple hymns best; the memory of Fr. Gerard singing “There is a balm in Gilead” makes me want to laugh and cry at the same time.

In his book Light of the World Benedict XVI comments on the qualities of men who are called to the priesthood. “The right man for the job,” he says, “is a man of God, a true man of faith, and, above all, a man of courage.” Courage is an essential quality in a shepherd. When you fight evil, you never deliver a knockout blow; but the tireless shepherd always rattles in for one more jab. Fr. Gerard exemplified the priestly courage Benedict spoke about. He was always in his corner, ready to land another punch.

I loved him, and I miss him. I commend his soul to Christ who is “the Good Shepherd and the Prince of the shepherds”. May he dwell in the house of the Lord forever.