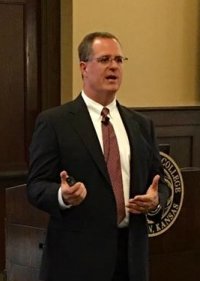 On October 5, President of Murphy-Hoffman Company Kenworth (MHC Kenworth) and Benedictine College board member Mike Murphy spoke to students about leadership, and offered some life advice that involved a little risk-taking.

Murphy graduated from Benedictine College in 1982 with a degree in Business and a minor in Economics after playing for the Raven football team as a tackle. After graduation he went on to join his father’s trucking company, along with his brothers, and the company has been growing ever since.

When MHC Kenworth first opened in 1975 – then Ozark Kenworth, Inc. – there was one dealership, located in a trailer in Ozark, Ark. When Murphy joined, there were three dealerships. Today there are 66 in 16 states across the Midwest.

Murphy attributed the company’s growth to the willingness of the employers to trust employees: “The only way a company can grow is to give up responsibility,” he said. “Otherwise it can only get as big as the owners can deal with. My dad and his business partner would let you fail because they knew you’d learn from the mistake.”

Murphy also discussed the focus of MHC Kenworth, saying that the typical corporate approach – putting the customers before the employees in order to increase profits – was not the basis of the company. Instead, their philosophy is that the “most important part of our company is the employees. Take care of them and they’ll take care of the customer. Profits are a by-product.”

After his talk, a student asked what advice Murphy could give to students who were about to leave college and go into the world, looking to enter the work force. Murphy responded that passion has to be the drive, and that it is important enough to risk leaving a dispassionate job you already have. As he put it, “I know ‘passion’ is cliché, but you have to enjoy what you’re doing. Be willing to leave what you’re doing to find your passion and follow it.”

Murphy concluded with a quote from entrepreneur Jim Rohn:

“The challenge of leadership is to be strong, but not rude; be kind, but not weak; be bold, but not bully; be thoughtful, but not lazy; be humble, but not timid; be proud, but not arrogant; have humor, but without folly.”