Secularism’s Victory Is Also Its Defeat 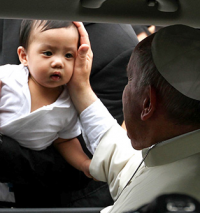 Sometimes it feels like the whole world is collapsing around us.

It’s not. But you can see why it looks like it is.

• Ireland rejected what every major religion and every major civilization in history has said about marriage. (Marriage everywhere is the state’s protection and encouragement for potential parents. Marriage in Ireland is the state’s registry of “official” sexual partners.)

• In America, public opinion has changed drastically to reject commonsense morality: Big majorities say you can kill yourself through physician-assisted suicide, turn your descendants into science projects through embryonic research, and that pretty much any kind of sex with most anyone else is probably fine.

• Meanwhile, in Europe, hostility to religion is an ominous dark cloud casting doubt on the future of religious freedom.

It is all beyond depressing.

But there is one terrible little secret that changes the whole picture: The whole edifice of aggressive radical secularism will come crashing down in our lifetime.

This is a practically a scientific certainty, but no one wants to admit it.

Pew Research spells it out with seven charts. They show that the West is contracepting and aborting its future away. We will soon have few workers supporting many dependents in a situation that has already led to economic disaster in Japan.

Meanwhile, in India and Africa, the population is growing and getting proportionally younger. India and Africa in 2050 will have far more workers with fewer older dependents.

Europe’s population will drop precipitously, and what will remain in 2050 will be much more likely to support Sharia and much less likely to support same-sex marriage than they are today. At the same time, America will become mostly Latino.

The radically secularist West is like Will Ferrell in Old School. He is an older man, drunk on the beer of the fake frat house he and his friends invented to relive the loose morals of their college days. Believing himself a triumphant trend-setter, he streaks down the street, imagining crowds of people following him.

Like him, the West is in for a rude awakening.

The party morals we are living make a lot of noise, but they have no future. It is only a matter of time before we realize we have no clothes on, and no one coming after us, and that we are running down an empty street in the dark.

•  India today has five times as many Catholics as Ireland. And India is ambitious and important the way Ireland used to be. The Irish helped build the Industrial Age; the Indians are programming the Digital Age as Ireland drifts into irrelevance.

• China took America’s spot as the world’s largest economy already — and by 2030 will have more churchgoers than America; churchgoers who fought to get to their pews, not churchgoers who couldn’t wait to get out.

• And as the members of the shrinking Catholic community in Europe debate how much they should change Christ’s teachings to appease the frat houses of the West, the Church rising in Africa is happy with the Gospel as it is.

Watching the dying West celebrate its decadence would be funny if it wasn’t so sad — and so scary. The truth is, life for Christians in the West will get much worse before it starts getting any better.

Our job as the darkness deepens is to start building the foundation for what will follow. Three places in particular are ripe with possibilities.

1. Defend life. The right to life is the issue of our day, and it’s a good one: Abortion exposes the deep bankruptcy of the bold new secularist morality: It is an ideology willing to kill to protect sexual license. Defending unborn human life is the quickest way to wake people up to what is happening.

2. Practice devotions to the Divine Mercy and Our Lady of Guadalupe. There are two solid reasons to do this: first, because the world desperately needs Christ’s forgiveness and Our Lady’s care. Second, because the more we do this, the more comfortable our immigrant brothers and sisters will feel coming to our churches — and if we could only evangelize them, we would snatch back the future of our country.

3. Build strong families. The family is the basic building block of society. That is not an ideological assertion, it is a description of all human experience. However clever Western secularists think they are, and however absurd they think Catholics are, our grandchildren will be the ones to decide what history will record about the child-averse sophisticates who once ruled the world.

There is a lot of pressure to accept radical moral upheaval as the inevitable next step in civilization. Resist it. The truth will not change — and the future belongs to those who accept the truth.

This article appeared first at Aleteia.