Snark and the New Evangelization 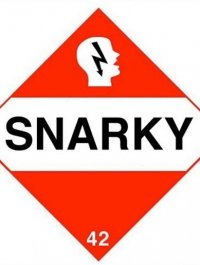 Snark is the vernacular of our age. Maybe this is because we learn how to converse through movies and sitcoms, where a constant tension is necessary to keep our attention. Maybe it is because comedians are our preferred public speakers.

Whatever the reason, our national conversation is peppered with cutting retorts and sardonic insights: Even if we don’t watch Jon Stewart deliver the news on Comedy Central, Twitter commentary is featured in the news we do watch. The Internet constantly offers us snarky lists of celebrities with ugly spouses, the biggest cheerleader fails, the most epic movie disasters, and on and on.

Like a missionary learning the language of the Andes, I have made several attempts to speak in snark to a snarky world. One was “Talking Back to Atheist Billboards,” my attempt to face down in-your-face atheism. I was almost as proud of it as my previous entry in the snark wars: “10 Awkward Facts About the Atheist Memorial,” a post that to this day generates traffic.

Reading through comments on Facebook, I saw what I expected: Some praise, for which I patted my own back; some denunciation, which steeled my defiant spirit; and then …. this:

“A good way to vent, I suppose, but love is usually a better persuader than ridicule.”

The comment killed my pride buzz. What it said is undeniably true, and it is something even atheists have been noticing lately.

Atheist Steve Neumann wrote in The Daily Beast about “The Case Against In Your Face Atheism.”

“Think about what religion is—a total worldview that lets each believer feel like she’s found meaning and purpose in a bewildering universe,” he wrote. “So, it’s not much of a stretch to argue that people are reluctant to give up their religious beliefs when they are intimately tied to their sense of self-worth.”

He cited 2005 business research by a Harvard and Duke University team that studied 10,000 work relationships in five organizations. They classified coworkers as “incompetent jerks” “competent jerks” and “loveable fools.”
“What they found was that most people preferred to work with the lovable fool rather than the competent jerk,” said Neumann.

His worry: The loveably foolish believer will beat the brilliant, cuttingly clever atheist every time.

Especially if they actually behave like Christians, I might add. As a headline on the satirical news site The Onion put it: Local Church Full Of Brainwashed Idiots Feeds Town’s Poor Every Week

“Christians cannot strategize and argue their way into renewed prominence,” argues Michael Brendan Dougherty. He looks at the dire and doomy character of much Christian discussion in public life and worries that it amounts to so much vinegar that won’t attract many flies.

“Just think about it,” he writes. “Very few non-religious people would open themselves to religious transformation if the expected result was that they’d be given the twitchy and aggrieved personality of an ideologue. Why, then, should ideologues represent the Church?”

He said there are two ways Christianity grows: Biologically (which we’re doing well, worldwide) and “by attraction.” “Growing by attraction also means that religious life should emphasize beauty. Before he was pope, Joseph Ratzinger said, ‘The only really effective apologia for Christianity comes down to two arguments, namely, the saints the Church has produced and the art which has grown in her womb.’ He’s right.”

Pope Benedict is a great example of the non-snarky Christian – not a loveable fool, but a competent lover of mankind.

His letter to militant Italian atheist Piergiorgio Odifreddi is a model of respect for your opponent and insistence on truth nonetheless.

And yet … and yet … I still feel there is some place in the debate for snark. So does Dougherty. He admiringly called Pope Francis an “Insult Comic” and pointed out that he has brought snark to the Vatican. Think of some of the phrases the Holy Father has used to sum up the shortcomings of the religion of our age: “fomenters of coprophagia,” “Mr. and Mrs. Whiner,” “Christians allergic to preaching,” “pastry-shop Christians,” “soap-bubble” Christians and many more.

“Insults aren’t foreign to Christianity,” Dougherty reminds us. “Jesus himself was brutal when condemning the ‘whitened sepulchers’ and the ‘brood of vipers’ among the religious leaders of his day.”

Which brings me back to my own snarky posts.

I have always been swayed by C.S. Lewis, who marshalled the quotes of two successful Christian evangelizers in the preface to his Screwtape Letters. “The best way to drive out the devil, if he will not yield to texts of Scripture, is to jeer and flout him, for he cannot bear scorn,” said Martin Luther. “The devil, the proud spirit, cannot endure to be mocked,” said St. Thomas More.

If gentle ridicule is the vernacular of the day, then isn’t a little of it necessary? It shouldn’t frame the Christian’s entire argument – it certainly doesn’t for Pope Francis. It has to be done with an eye toward bettering the other. It should look more like the loving way a friend teases than the ugly way a bully teases.

So let’s continue the experiment and carve out some small place for snark in the New Evangelization. We’ll see how it goes.