Temporary Success for the Little Sisters of the Poor 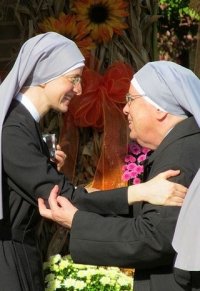 The new school year kicks off with the Memorare Army on Wednesday. Benedictine College’s President Stephen D. Minnis and Dean Kimberly Shankman will lead a rosary for the school year and a Memorare for religious liberty at Mary’s Grotto at 7:30 A.M.

The Memorare Army is Benedictine’s prayer campaign for religious liberty. You can find more information here.

The school’s prayers are especially timely this year because of recent developments with the Little Sisters of the Poor lawsuit in Colorado.

On Friday, Aug. 21, the 10th Circuit Court of Appeals in Colorado ruled that the Little Sisters receive temporary protection from Obamacare. The court order means that the Sisters do not have to provide contraceptives to their employees, either directly or through their insurance provider.

This new protection is the result of an appeal led by the Becket Fund for Religious Liberty, a nonprofit law organization founded to protect the religious freedom of any person from any faith.

However, the protective court order

is only
temporary while the case is ongoing. According to the Colorado Springs Gazette, “if the court agrees to hear the case, a decision expected this fall, suspension of the mandate will remain until its final ruling.”

Only one month ago, the Little Sisters’ position was the opposite of what it is now – on July 14, the 10th Circuit Court ruled that the Sisters must violate their consciences and comply with Obamacare by providing their employees with contraception.

The Gazette points out that the case is not before the court in order to make a statement against contraception, abortion or politics themselves, but only to fight to protect religious freedom. As Becket Fund senior counsel Mark Rienzi said in his interview with the Gazette,

“The federal government doesn’t need the Little Sisters or any other ministry to help it distribute abortion-inducing drugs and other contraceptives. Yet it not only insists on forcing them to participate in the delivery, it argues that their beliefs against participating are wrong and that government officials and judges can tell the Little Sisters what Catholic theology really requires. That’s wrong, and it’s dangerous.”