The Death of a Man of Mercy 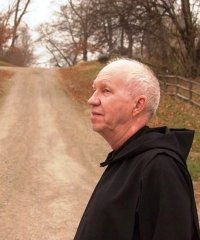 “We’re meeting at the Connor’s at 7 o’clock for pot luck.”

This seems like a rather innocuous invitation to an evening dinner, almost matter-of-fact: “If you can be there, we hope to see you — oh, and bring a dish.”

However, if that invitation came from Fr. Bruce during one of his 17 trips to Saudi Arabia recruiting students for Maur Hill Academy here in Atchison, it meant he would be offering Mass for the Catholics in the area, an illegal act in that country.

As he would gather people for Mass, he was putting his life in danger, and these Catholics were choosing to do the same; attending this Mass had potentially a great cost. But it was the Eucharist, the source and summit of our lives, the sacrament that brings us together as the Body of Christ; it was what Fr. Bruce had to do.

Providing for the faith life of those with whom he was charged was central to the monastic life for Fr. Bruce.

Whether he was teaching and prefecting at Maur Hill; offering himself in prison ministry at the Lansing Correctional Facility, or the Atchison and Topeka Juvenile Correctional Facilities; whether he was forming men in the monastic life here at the Abbey; or providing spiritual direction and hearing confessions of college students, he understood that the purpose of his ministry was to bring these individuals closer to Christ, even if the individual didn’t always realize the need for growth in faith.

First and foremost, Fr. Bruce was concerned with whether one was doing what was needed to grow in relationship with Christ. While he may have come across as gruff at times, his intentions were always to encourage one in striving to do better.

It followed the wisdom of St. Benedict who said, “mercy [should always] triumph over judgment … remembering not to crush the bruised reed,” however, “give the strong something to strive for, and the weak nothing to run from.”

While Fr. Bruce was a tough teacher he desired to see his students succeed and ushered them in gentle ways, yet at times needing to push them rather sternly, toward Truth and the good that was in them.

Father Bruce and an Atchison businessman would laugh over the only “C” this former Maur Hill student received, receiving it in freshman religion with Fr. Bruce.

“After giving me a ‘C’,” he said, Fr. Bruce “motivated me, and strongly encouraged me to be the best I could be and live up to my potential.”

And then there were the times when one of the foreign students at Maur Hill would be asked to leave because of disciplinary reasons.

Knowing that the student couldn’t easily return to their home country, Fr. Bruce would arrange to have them stay with his sister in South Central Missouri until the new semester when the student would hopefully be readmitted.

Father Bruce understood what St. Paul wrote in our second reading this morning from the Letter to the Hebrews, “For we do not have a high priest, [Jesus,] who is unable to sympathize with our weaknesses, but one who has similarly been tested in every way.”

Whether Fr. Bruce was dealing with a student at Maur Hill or at Benedictine College, one of the novices, or an inmate at the Lansing Correctional Facility, he understood that he himself was in need of the mercy of God, and so desired that others know that mercy also.

It is knowing that we each are created in the image and likeness of God, yet we have at times made poor decisions through our weakness, or through just plain stupidity.

Yet St. Paul reminds us that it is in embracing our weakness, in learning obedience through what we suffer, that the virtue of humility begins to grow in us and we are able to approach God and ask for his mercy so that we might be restored to his image and likeness.

Our first reading from Lamentations reminds us that God’s mercy will always be there if we seek it out.

“The Lord’s acts of mercy are not exhausted, his compassion is not spent; They are renewed each morning — great is your faithfulness.”

And each morning with his holy hour, and Vigils and Morning Prayer, Fr. Bruce sought to renew that relationship with Christ, because he knew that he could not give what he himself had not received.

It was Christmas morning coming from his holy hour to Morning Prayer when he collapse.

God’s mercies are renewed each morning — great is his faithfulness.

This unexhausted mercy was played out day after day in Fr. Bruce’s willingness to hear a confession at the drop of a hat.

In the great Jubilee Year 2000, Fr. Bruce volunteered, and was permitted by Abbot Barnabas, to spend six months at St. Paul’s Outside the Walls, the Benedictine Basilica in Rome, hearing confessions eight hours a day in English and French.

It was a rare day if you couldn’t find Fr. Bruce in this north confessional before an Abbey Mass, or down in one of the Guest House parlor rooms meeting with a student who needed advice and the mercy of God.

And his loyalty to the men incarcerated at the Lansing Correctional Facility — in good weather and bad, if he was scheduled to be there and there wasn’t a lockdown, he was there.

As his ability to walk began to deteriorate because of the genetic disease Fragile X, it was incredible to see him at the Lansing Correctional Facility maneuver through the security doors, up and down steps and down long hallways, just to get to the big prison yard, only then to have to make the long walk across the yard to the other side where the chapels are located.

And then to see how the inmates would take care of him, making sure everything was in place for the Mass.

As I mentioned last night, the afghan with the Abbey Coat of Arms you see draped from the north confessional, was made by one of the inmates at Lansing.

This inmate, after nearly 25 years in the prison system, was scheduled to be released this morning; however, because of the holiday, he will be released on Friday.

This man hopes to visit Fr. Bruce very soon in his final resting place in the Abbey Cemetery.

Father Bruce liked to tell the story of how he was given his monastic name.

Given the name Robert at birth by his parents, William and Loretta, when young Robert entered the novitiate, Abbot Cuthbert announced that his name would be Bruce.

Kind of bewildered at the time by the choice, he never asked Abbot Cuthbert until some years later why Abbot Cuthbert chose to give him the name “Bruce.”

Abbot Cuthbert admitted that he didn’t think Fr. Bruce would make it in the Abbey, and so he didn’t want to waste a good name on him.

For all the Bruces out there, I think it is a perfectly good name, a derivative of Ambrose, whose feast day is December 7th.

Whether or not one appreciates the name Bruce, let’s imagine the number of people who experienced the mercy of God because Fr. Bruce persevered, and because Abbot Cuthbert was wrong.

“We’re meeting at the Connor’s at 7 o’clock for pot luck.”

We recognize today that this invitation is given to us.

This invitation to receive God’s mercy and grace in our lives, reminding ourselves of St. Matthew’s call in the Gospel, “‘Why does your teacher eat with tax collectors and sinners?’  [Jesus] heard this and said, ‘Those who are well do not need a physician, but the sick do.  Go and learn the meaning of the words, ‘I desire mercy, not sacrifice.’  I did not come to call the righteous but sinners.’”

As Fr. Bruce would put it, “We are all good people who have just made bad choices, and are each in need of God’s mercy.”

As we lift up Fr. Bruce — our confrere, teacher, confessor, mentor, and friend — we offer our prayers for his eternal rest.

And when we hear that invitation from the Lord, “We’re meeting at the Connor’s,” may we respond in the words of St. Paul to the Hebrews, “Let us confidently approach the throne of grace to receive mercy and to find grace for timely help.”