Sunday: The Magi, Models for Misfits 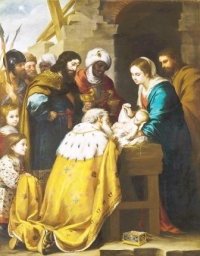 This Sunday is Epiphany Sunday in the United States (Year B), when we celebrate the visit of the magi to Mary and Joseph and the Christ child.

The Magi sometimes seem out of place, a strange intrusion into the Gospel from a foreign place. It’s almost as if characters from Ali Baba and the Forty Thieves somehow wandered into the wrong story.

But if you think about it, don’t all of us sometimes feel like we are out of place in the company Christ keeps? Don’t we sometimes wonder if we belong to another story?

Evelyn Waugh certainly did. He is a British novelist who converted to Catholicism as an adult. In a telling passage from the novel he wrote about St. Helen, the convert-author has his convert-heroine address the Wise Men at an Epiphany Mass.

Helen’s words can help us see lessons in the Three Kings for ourselves.

Models for Those Who Strayed

The Magi didn’t visit the manger, but visited Christ later when they were in “a house” in Bethlehem, according to the Gospel.

“‘Like me,” Helen said to the Magi, “you were late in coming. The shepherds were here long before; even the cattle. They had joined the chorus of angels before you were on your way.”

Perhaps we have been miles away from Christ in our lives, too. Perhaps we have “wandered afar.” It doesn’t matter. Like the Wise Men, we will discover that it’s never too late to come closer to Jesus. In fact, we have it on good authority that there is more rejoicing in heaven for the latecomers than there is for the ones who came early and waited.

Models for Those Who Need a Flashing Neon Sign

Says Helen: “For you, the primordial discipline of the heavens was relaxed, and a new defiant light blazed among the disconcerted stars. How laboriously you came, taking sights and calculating, when the shepherds had run barefoot!”

Some people seem to come naturally to faith. That is a great blessing. For others, it is a difficult process coming to accept God’s power in their lives. The skeptics of the world get a bad name. Yes, they ask many questions. Yes, they are slow to believe. But when they do come, like the Magi, they are valuable disciples.

Models for the Out of Place

“How odd you looked on the road, attended by what outlandish liveries, laden with such preposterous gifts!” Helen says. “Yet you came and were not turned away. You too found room before the manger. Your gifts were not needed, but they were accepted and put carefully away.”

If we have ever felt like we don’t quite fit in among the band of disciples — our parish, maybe, or whatever fellow believers make up our group — we can rest assured that we are in the best of company. If Christ is truly the center and purpose of the universe — and he is — then we should find all kinds by his side. Even people like the Magi. Even people like us.

All he requires is that we be generous with him — giving according to who we are and what we have, whether that matches everyone else or not.

A version of this article appeared in the National Catholic Register.