The Ravens and the Royals 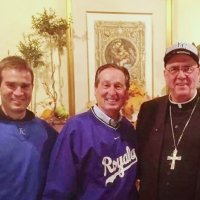 Classes continued as normal at Benedictine College during the Nov. 3 celebratory parade for the 2015 World Series Champions in Kansas City, but that isn’t to say the campus wasn’t celebrating.

The college’s connections to the team run deep — and include prayers asked and answered.

Moore has been close to the college for many years.

“I was impressed with Dayton Moore as soon as he started as general manager in 2006,” said President Stephen D. Minnis. “He said in an interview that he wanted the team to operate at all times with a sense of ‘class, professionalism, success and excellence.’ We adopted the same saying here at Benedictine College.”

The school’s staff department heads began meeting once a year for a work retreat in the conference center at Kaufman Stadium, home of the Royals. Moore would usually stop by the office to update them on his strategy to put together winning teams with a high work ethic.

But it was in Minnis and Dean Joe Wurtz’ Leadership: Vision and Values class that Moore made a bold prediction.

That class visit kicked off a year of more connections.

The Royals selected Katie Lind, a senior at Benedictine College, to sing the national anthem at Kauffman Stadium July 9. Hundreds of Ravens made the July 9 game their own — including Rocky the Raven himself. Pictures of the Ravens mascot together with the Royals’ mascot, Slugger, became iconic of the two institutions’ relationship.

In 2015, baseball was big on campus this year as the college opened new baseball and softball facilities, with a turfed baseball infield and new scoreboards, Olsen Stadium and Laughlin Field at the college’s new Asher Sports Complex.

So it is appropriate that the year ended with Dayton Moore encouraging seniors to set big goals and work for them. He has shown it can be done.

“The future belongs to people who believe in it,” he said. “There’s no doubt in my mind that each and every one of you are gifted for success and will make a difference.”

The Royals themselves proved those words true this October and November.

In Spring 2006, the school was raising money for the new Ferrell Academic Center. A donor made an a arrangement where he would give $2 million to the fundraising campaign if the college raised $6 million. Raising in essence a total of $8 million in four months was unheard of in college history.

But the college had faith it could be done. During that time many incredible people came to the front and committed to the building.

In the last day of the challenge, at 10:00 am, the college was still $650,000 away from meeting the donor’s challenge. On that same day the college was hosting Mike Sweeney, then-captain of the Kansas City Royals.

Sweeney told a story about how he was struggling early in his career and was told that he had 0% chance of being a Royal in the coming season. In church one day Sweeney began to cry, not knowing what was going to happen next. One of his friends saw him and gave him a picture of a tandem bicycle — a two-seater.

She told Mike he was on the front pedaling and guiding the bike. She said Mike had to get on the back of that bike and pedal as hard as he could, and put God on the front and let his will be done.

Sweeney did and his whole life — and career — changed. He went to spring training and hit very well, made the club and went to five All-Star games and is now in the Royals Hall of Fame.

Minnis was inspired by this story. He walked outside, looked up to heaven and told God that he was going to peddle hard the rest of the day and let his will be done.

“After that, little tandem bicycles became symbols of our campaign and when it was all over we had completed the largest fundraising campaign in the college’s history.”

Minnis said he was proud to see the many students on campus with Royals gear the day after the historic win.

“The Royals have given us a lot of hope this year with their come-from-behind World Series win,” he said. “But at Benedictine College, we are used to being inspired by this great team.”