The Speaker Candidate and Religious Freedom 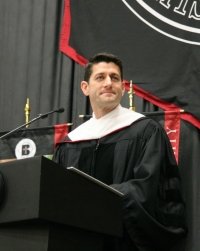 With Paul Ryan now running for Speaker of the House, he’s getting a lot of attention. But one aspect of his life is largely being ignored, and it’s arguably the most important part – his Catholicity.

Two years ago, Ryan came to Benedictine College as the commencement speaker. No doubt that’s where he got the skills that could win him the race for Speaker.

He had just ended his campaign for Vice President, but while he was here, Ryan spoke more about his faith than his politics. On the campaign trail, Ryan looked to the Rosary for comfort, and ended his race with a priest’s blessing. At Benedictine, he took the opportunity to tell graduates how the Church had affected him as a public servant, and to share how they could apply what he had learned to their own lives.

Graduates have a lot on their minds, mostly centered around one thing – money. They need a job, they have loans, they have big plans that require funds. Ryan addressed that issue, saying, “Money isn’t everything. Wealth is a means to an end. And the end isn’t a full bank account. The end is a good life – one lived in accordance with God. And to live a truly good life, we must go beyond ourselves. We must minister to the poor and the sick. Concern for the poor doesn’t demand faith in big government. It demands something more – from all of us.”

If we continue to believe that the war on poverty is primarily a government responsibility, then we will continue to weaken our communities. We will drift further apart as people.”

Once he entered politics in Congress, Ryan had

He continued, “We see these principles in the First Amendment. Religious communities do great things in our country. They care for the poor, the hungry, and the sick. And they do this work in their own unique way, guided by their conscience and their beliefs.

That’s why I strongly support measures to protect religious liberty. I believe Catholic institutions – like colleges, hospitals, and social agencies – should be free to do their work according to their moral standards. It’s essential to our society. And it’s essential to subsidiarity.”

Ryan ended by giving the following advice which can be applied to anyone, regardless of whether they are still to graduate or if they’ve been out of school for decades:

“If you form your views through discovery and debate, through deep thought and prayer, your moral code will be far more durable and rewarding.

But as you develop that code, you have to live up to it. You have to put it into practice. As Catholics, we’re meant to be in the world, not of the world. We’re meant to take up the vocation God has given us, and to do it well.

“So my advice is to keep searching. And when you need a port of call, I hope you will take comfort in the Church as I have. And when you do, you will know for certain that you’re there to stay.”

The Memorare Army is praying for religious freedom for the same reasons. You can join us here and help fight for religious liberty in America.