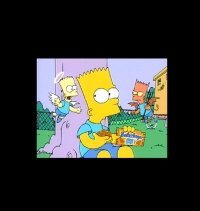 Is evil really more interesting than good? Everyone from from Bill Joel (“I’d rather laugh with the sinners than cry with the saints”) to Dostoevskky (“All happy families resemble one another, each unhappy family is unhappy in its own way”) to Bart Simpson (“All the best bands are affiliated with Satan”) have said so.

But the readings for this Sunday, the Third Sunday of Easter, Year B, show otherwise.

The truth is, evil is more banal than good, the virtuous are more complex than sinners who have abandoned themselves to their sin, and goodness is in the end more fascinating than evil.

Jesus is a perfect example of that.

In the first reading, Peter confronts authorities about what they have done: “The author of life you put to death, but God raised him from the dead; of this we are witnesses.”

Where are the great stories about the fascinating people who put Jesus to death?

Caiaphas, Herod, Pilate, Judas — their actions weren’t interesting in themselves; they were only interesting insofar as they showed Christ’s goodness. If Christ were really a criminal, and had simply died and not risen from the dead, no one would remember the details of that day.

Meanwhile Peter is interesting not because of his sin, but because of his redemption. He denied Christ, but came back. And, next to Jesus, the single most popular character from the passion story is his mother Mary, who never sinned at all. It fascinates us that she withstood temptation for a lifetime, up to and including standing by her son as he was falsely executed and then receiving his body into her lap.

In the second reading, St. John gives clear advice to Christians: “The way we may be sure that we know him is to keep his commandments.”

To steal is a bicycle is, well, to steal. There are varieties of ways to steal it, but it all comes down to the same thing: Finding an improperly guarded bicycle and stowing it somewhere.

Or there is the drama of not getting a new bicycle at all. One of the most famous movies in history is “The Bicycle Thief,” about a man whose bicycle is stolen, but who resolves not to steal one himself.

Says the Gospel: “Thus it is written that the Christ would suffer and rise from the dead on the third day and that repentance, for the forgiveness of sins, would be preached in his name to all the nations, beginning from Jerusalem.”

We have already noted that Christ suffering and rising from the dead is a lot more interesting than Pilate caving to a crowd, or Judas selling out his master and then despairing over it.

But the task given to the Christians is also more interesting than his opponents’ task. They will go on living their life in the manner they always have. Christians are given a mission: To travel the world preaching his name, or perhaps to stay home and encounter on their home turf those who do not believe.

“He who does not bellow the truth when he knows the truth makes himself the accomplice of liars and forgers,” said the French poet Charles Peguy.

To live for truth means to be in conflict with the world. And not just the conflict of disagreement. The Christian’s is an interesting conflict in which the Christian has to oppose the world while loving the world and trying to help the world save face and understand the error of its ways.

That’s more interesting than just following the pack and doing what is expected.

Billy Joel was wrong. It is the saints who laugh with each other; the liars and forgers are only interested in themselves.

Dostoevsky didn’t mention that the 10 commandments sum up the ways unhappy families are unhappy.

And a quick comparison of the songs “Highway to Hell” and “Amazing Grace” will be sufficient to answer Bart Simpson’s mistake.

“Sing a new song to the Lord,” says Sunday’s Psalm. “The Lord has made his victory known, has revealed his triumph for the nations to see.”

And that may be the best example of why good is clearly more exciting than evil: Good is worth breaking into song over.