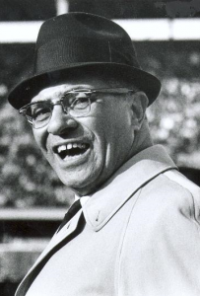 Before Super Bowl XLVII starts (yes, that’s this year’s) the NFL Channel will air a documentary spotlighting Vince Lombardi, including discussion of how his devout Catholic faith shaped him into the coach he became. (If you are receiving this by e-mail, click here to watch the video.)

The winner of each year’s Super Bowl gets the Vince Lombardi Trophy. Lombardi started out hoping to be a priest, and remained a daily communicant throughout his career.

His love for faith has stayed in his family. So did his love for football. The National Catholic Register this week features an interview with his grandson Joe Lombardi, offensive coordinator for the Lions, who saw his own faith life renewed by Janet Smith’s “Contraception: Why Not?” and the daily Rosary.

Vince Lombardi’s faith won him a place in the American Catholic Hall of Fame at Benedictine College’s Gregorian Institute.