What the Sacred Heart Says 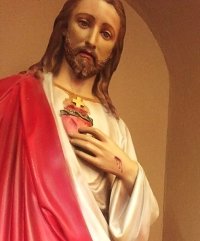 The Sacred Heart used to bother me. I found the pictures of Jesus with his heart hovering in front of his shirt weird. I also found most expressions of Sacred Heart piety archaic-sounding and off-putting.

I liked Jesus. I just didn’t see the point of focusing on his cardiovascular system.

The popes of the 20th century caused me to begrudgingly reconsider my judgement—they praised devotion to the Sacred Heart, calling it “necessary” and “the sum of all religion.”

But it took Mother Teresa to take the grudging away.

She described how she has been devoted to the Sacred Heart since her childhood, and, citing the Gospel, she said “You have to learn from the Sacred Heart of Jesus. That is why Jesus said: ‘Learn of me’ — not from books.’”

The Catholic faith is set up such that St. Thomas Aquinas can write theological masterworks about it—and illiterate people can have just as profound an experience of the faith as him.

Think about how the Church speaks to us without using words: In baptism, water washes our head, and our soul; and I can’t imagine a better way for Christ to say, “I want to be united wholly with you, and I want you to take me out of the Church and into the streets,” than through his real presence in communion.

It’s so simple, a child can understand it. The Sacred Heart is that way. 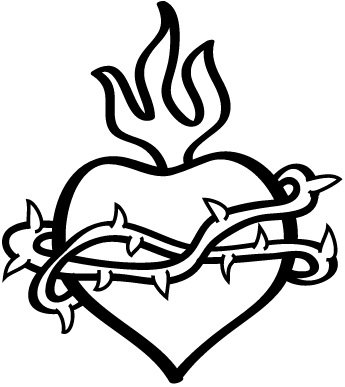 First of all, it’s a heart—not a brain.

There is no formal devotion to the Sacred Brain of Jesus that I know of.

There is, however, a devotion to the Soviet Brain of Lenin. Vladimir Lenin’s brain was taken from his corpse at his death and studied by scientists eager to find a key therein to the brilliance of the mastermind of the Soviet revolution.

The two devotions—ours to the heart, theirs to the brain—are telling.

Lenin started the vast system of Soviet communism; his legacy was its rules, its ideology and its hierarchy, and his brain was the thing that devised it.

Jesus Christ also started a system—the Church—with rules, teachings and hierarchy. But that’s not what is fundamentally important to him: The fact of the incarnation is.

We honor Jesus’ heart, not his brain. For us, his legacy is his very life—the very fact of his existence, as God and man, living among us.

Second, it is also not an aura.

We live in a world where people believe that being “spiritual” and being “religious” are two different things.

Oprah Winfrey described spirituality this way: “Spirituality for me is recognizing that I am connected to the energy of all creation, that I am a part of it—and it is always a part of me.”

The Sacred Heart refreshingly reminds us that “spirit” does not exist in some ethereal magical alternate plane of reality.
Our spirits and our bodies are one.

The Sacred Heart is a countersign to “spiritual but not religious.”

Any child who looks on it sees very plainly that in it God is telling us that his incarnation was real—that he was truly human and truly divine—and that our holiness is not a halo outside us, but a reality in the very depths of us.

Third, it shows us what participation in the life of the Trinity means.

A priest once described how his vocation began when he stared at his family’s picture of the Sacred Heart as a child.

He had consecrated himself to the Sacred Heart before he understood what that could possibly mean.

The sacrament of baptism is supposed to make us “a participant in the divine life of the Trinity.” One thing that means is this: The persons of the Trinity exist in a continual mutual self-gift, one to the other. The Father gives all to the Son; the Son returns all to the Father and the Holy Spirit proceeds from that love, giving all back.

“Through the union of the Heart of Jesus to the Person of the Word of God we can say: in Jesus, God loves humanly, suffers humanly, rejoices humanly. And vice versa: in Jesus, human love, human suffering, human glory acquire divine intensity and power.”

Fourth, it is an icon of what sin looks like eternally.

It is easy to see sin and redemption as an event that happened in the past, something over and done with.

But “those who plunge themselves into disorders and crimes crucify the Son of God anew in their hearts (for he is in them),” says the Catechism (No. 598) quoting St. Francis.

The Sacred Heart picture shows how deeply the Second Person of the Trinity is wounded by sin – in his very heart – and how he carries the burden of sin with him eternally.

“Sins against chastity and charity are directly wounding the heart of Jesus,” said Mother Teresa. “So let our love and our fidelity be a relief to the Sacred Heart.”

Sacred Heart devotion reminds us that Jesus is God, and that he is man… it encourages our self-gift, and it provides reparation for the sins of the world.

Maybe that does sound old-fashioned after all. But in a good way.
This article first appeared at Aleteia.