When the Pope Comes to Town 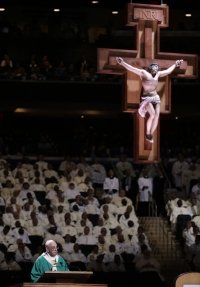 The papal jet has lifted off, the emoji pope pictures have been put away, the fan-girl nuns have all gone home and the starry-eyed masses have left the streets of Philadelphia.

We are now once again living in a United States of America with no Pope Francis in it.

So, what just happened? What were we supposed to take from that?

The U.S. House Speaker usually avoids reporters. He didn’t the night of the Pope’s visit. Political journalist Robert Costa tells the story of how the Speaker saw him standing near the Capitol rotunda and accosted him.

He insisted on repeating every detail of his encounter with Pope Francis that day, acting it out, casting Costa as Boehner. (“’Hold on, hold on,’ he said as I pulled my arm away. ‘Let me finish!’”)

Boehner, a Catholic, was unable to move past that moment. Or he was unable to stop moving because of it. He resigned the next morning.

It reminded me of a story the late NBC television reporter Tim Russert told about visiting John Paul’s Vatican.

“The door opened, and there was the pope dressed in white. He walked solemnly into the room. I was there to convince his holiness it was in his interest to appear on the Today show. But my thoughts soon turned away from [NBC’s] ratings toward the idea of salvation. I stood there with the Vicar of Christ. I simply blurted, ‘Bless me, Father!”

This is the power of a papal visit.

And that has something more than celebrity power.

It is the phenomenon described in Acts 5:15, where the people “even carried the sick out into the streets and laid them on cots and pallets, so that when Peter came by at least his shadow might fall on any one of them.”

Did Peter’s shadow have magical powers? Certainly not. Was the fisherman from Galilee himself worthy of that much fuss? Far from it.

It was Jesus Christ they sought —and they knew where to find him. In his vicar on earth.

When Pope Francis made his first remarks on American soil, at the White House, some critics complained that he didn’t mention Jesus Christ. They took to Twitter, Facebook and blogs. “How dare he?” they asked.

When it was pointed out that Pope Benedict didn’t mention Jesus at the White House either, they said, “Well, he should have, too!”

I didn’t see anyone point out that St. John Paul II took the same diplomatic approach, but he did, or that Francis proclaimed Christ in every public event — but that was true, too.

I also didn’t see anyone point out that when you’re a Pope, you proclaim Christ with your very presence. This is what makes some of us uneasy about seeing the Pope in a line-up of religious figures. He looks strange there. He is a singular figure, not just one of the bunch.

He looks just as striking standing in the White House, dressed in white, like a host or an Easter Candle — a powerful presence that owes every bit of its power to Jesus.

Ruth Smart of Brooklyn spoke to the Associated Press about seeing him in New York’s Central Park, but she could have been talking to St. Luke about seeking out the pope’s shadow in the streets of Jerusalem.

“As he passed by, you felt a cool, refreshing peace, as if he were spreading a huge blanket of peace through the crowd,” she told the Associated Press. “Even though the crowd exploded in a roar, it was pure joy.”

The power of the papal presence was described like that, again and again, in coverage of the event: It was peace, joy … and encouragement.

His unplanned visit encouraged the Little Sisters of the Poor in their lawsuit against the Obama administration’s HHS mandate. “It gave us a lot of energy and everyone was very fortified,” Sister Constance Veit told NBC News. “It was a spiritual shot in the arm.”

Bishops had the same response. In the National Catholic Register, again and again, they summed up his visit as “encouraging.”

He dealt with non-Catholics the same way. “He hasn’t taken that tone of correcting people or criticizing people,” Father Chris Pollard, who was with the Holy See at the United Nations from 2009 to 2012, told Catholic News Agency. Instead, Francis was “using what they already find familiar and agreeable, and trying to take them a few steps closer to the Christian faith.”

Before he came, The New York Times treated the Pope like a traffic hazard — a kind of “snowmageddon” event headed their way. But describing his visit, the Times dissolved into lyrical joy.

“The layers of political commentary that followed his remarks in Washington earlier in the week seemed to fall away, leaving the day one of pure emotion for Francis and those wishing to be near him,” reported the Times. They quoted a 70-year-old woman who saw him. “I’m Jewish, and this is still the coolest moment of my life.”

When he spoke to Harlem schoolchildren, he ended by saying, “Before going, I want to give you some homework. Can I? It is just a little request, but a very important one. Please don’t forget to pray for me, so that I can share with many people the joy of Jesus.“

Now he’s gone. But he told us what to do: Go to Jesus.