Who Is He? Pope Francis in South America 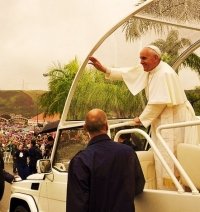 When I shared my favorite Pope Francis quotes from his South America trip at Catholic Vote, I had to leave off a few. That’s a shame: They were precisely the ones that might give comfort to those Americans who feel a little sketchy about Pope Francis right now.

Pope Francis is at a strange point in his popularity in America. The regular pro-Pope crowd is a little cool to him (or is “apoplectically enraged at him” better?); and Francis has new fans who are not used to cheering for popes.

This is in part because Francis more forcefully expresses the economic views he shares with Popes Benedict XVI and John Paul II, partly because he is very much for action on global warming while many in America are more cautious, partly because danger looms for Catholics, and so we are in a gloomy mood to start with. But it is mostly because the media has constructed a false narrative about Pope Francis that has proven hard to shake.

Take heart! Here are some additional quotes from the South America trip that might help.

In words reminiscent of Chief Justice Roberts’ retort to Justice Kennedy (Roberts said: “The majority graciously suggests that religious believers may continue to ‘advocate’ and ‘teach’ their views of marriage. The First Amendment guarantees, however, the freedom to ‘exercise’ religion.”), Pope Francis reminded civil leaders in Bolivia July 9 that Christianity is a vital part of their identity, not just one freedom among many:

“Freedom is always the best environment for thinkers, civic associations and the communications media to carry our their activities with passion and creativity in service of the common good.  … Respectfully: Christianity has played the important role in shaping the identity of the Bolivian people. Religious freedom — a phrase we often encounter in civil discourse — also reminds us that faith cannot be restricted to a purely subjective experience. It is not a subculture.”

If you’re worried about Francis’ critique of capitalism, read Laudato Sí 129: “In order to continue providing employment, it is imperative to promote an economy which favors productive diversity and business creativity. … Business is a noble vocation, directed to producing wealth and improving our world.” What Francis critiques are the excesses of capitalism. So does the old maxim that “capitalism is the worst economic system, except for all the others” and G.K. Chesterton when he says capitalism killed the family. So don’t worry. Francis is no a Marxist, he just favors entrepreneurial capitalism (so should you). In Paraguay July 11 Francis recalled how ideologies wreaked havoc on the 20th century. One small part:

“Ideologies end badly, and are useless. They relate to people in ways that are either incomplete, unhealthy, or evil. Ideologies do not embrace a people. You just have to look at the last century. What was the result of ideologies? Dictatorships, in every case.”

3. Pope Francis is no “faithless cleric” either.

We have all had run-ins with the “faithless cleric” — the confessor who doesn’t seem to really believe you sinned, the pastor who is uncomfortable with popular piety, or the priest who seems a little reluctant to bless your medals like it’s some kind of popish superstition. Pope Francis is not one of those. He shared this great story July 9 in Bolivia, remembering when he was walking with another priest in 1975 and was approached by a woman after Mass:

“She said to the priest who was accompanying me, ‘Father, please bless this image.’ He replied, ‘Lady, you were at Mass.’ ‘Yes, Father.’ ‘Well then, the blessing of God, the presence of God there blesses everything.’ ‘Yes Father, Yes Father’ came the reply. At that moment another priest came up, a friend of the priest that had just spoken, but they hadn’t seen each other so he says, ‘Oh, you’re here!’ He turned away and the woman … looked at me and said: ‘Father, please bless it.’” Francis went on to complain about pastors “who always put up barriers between themselves and the people of God, pushing them away.”

4. He believes in the Father’s “multiplying power.”

Critics of the Pope made a big deal out of the fact that Pope Francis used the phrase “miracle of sharing” with regard to the Gospel about the multiplication of the loaves. They fear he is one of those “the-real-miracle-is-that-everyone-shared” guys— even though Pope Francis has made it clear before that five loaves fed the crowd, and Pope Benedict expresses the importance of sharing in the story just as much, if not more than Francis. Anyway, on July 9 in Bolivia, Francis stressed supernatural power in the story:

“Blessing has this double aspect: thanksgiving and transformative power. It is a recognition that life is always a gift which, when placed in the hands of God, starts to multiply. Our Father never abandons us; he makes everything multiply.”

5. He sees the supernatural battle clearly.

Last is a great passage I would have included if I could make it shorter, in which Pope Francis exhorted young people in Paraguay July 12 to join Christ’s team, not the devil’s. It’s great Ignatian spiritual advice, and I’ll leave you with it …

“Saint Ignatius has a famous meditation on the two standards. He describes the standard of the devil and then the standard of Christ. It would be like the football jerseys of two different teams. And he asks us which team we want to play for.

“In this meditation, he has us imagine: What it would be like to belong to one or the other team. As if he was saying to us: ‘In this life, which team do you want to play for?’

“Saint Ignatius says that the devil, in order to recruit players, promises that those who play on his side will receive riches, honor, glory and power. They will be famous. Everyone will worship them.

“Then, Ignatius tells us the way Jesus plays. His game is not something fantastic. Jesus doesn’t tell us that we will be stars, celebrities, in this life. Instead, he tells us that playing with him is about humility, love, service to others. Jesus does not lie to us; he takes us seriously.

“In the Bible, the devil is called the father of lies. What he promises, or better, what he makes you think, is that, if you do certain things, you will be happy. And later, when you think about it, you realize that you weren’t happy at all. That you were up against something which, far from giving you happiness, made you feel more empty, even sad.

“Friends: the devil is a con artist. He makes promise after promise, but he never delivers. He’ll never really do anything he says. He doesn’t make good on his promises. He makes you want things which he can’t give, whether you get them or not. He makes you put your hopes in things which will never make you happy. That’s his game, his strategy. He talks a lot, he offers a lot, but he doesn’t deliver. He is a con artist because everything he promises us is divisive, it is about comparing ourselves to others, about stepping over them in order to get what we want. He is a con artist because he tells us that we have to abandon our friends, and never to stand by anyone. Everything is based on appearances. He makes you think that your worth depends on how much you possess.

“Then we have Jesus, who asks us to play on his team. He doesn’t con us, nor does he promise us the world. He doesn’t tell us that we will find happiness in wealth, power and pride. Just the opposite. He shows us a different way. This coach tells his players: ‘Blessed, happy are the poor in spirit, those who mourn, the meek, those who hunger and thirst for righteousness, the merciful, the pure in heart, the peacemakers, those who are persecuted for righteousness’ sake.’ And he ends up by telling them: ‘Rejoice on account of all this!’”