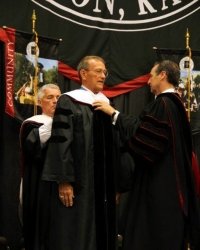 “What we are is God’s gift to us. What we become is our gift to God.”

That and a plug for the daily rosary was the message Colonel Roger Donlon gave the graduating class of 2015 at Benedictine College’s commencement last May. The Congressional Medal of Honor recipient was one of two honorees: The other was Dayton Moore, general manager of the Kansas City Royals.

The next public appearance of the two together: Game 2 of the 2015 World Series at the Kansas City Royals, October 28 at 7:07 p.m. CST, where Roger Donlon throws the first pitch.

The two also spoke to the Leadership Class led by Benedictine College President Stephen D. Minnis and Dean Joseph Wurtz. It was in that class that Moore predicted that the Royals would go to the World Series for the first time in decades in 2014. And it was in that class that Roger Donlon told the story that made him the first Congressional Medal of Honor recipient from the Vietnam War.

In July, 1964, Donlon’s base came under fire in the middle of the night. All communication was cut off between him men, and they were outnumbered 10 to 1. Donlon became the messenger between mortar pits.

A bullet hit his stomach but he kept going. He saw a sergeant in trouble and dragged him to safety. Then a mortar exploded and wounded his left shoulder. After that, he crawled 575 feet to another firing position and directed efforts to protect the camp.

“My senior NCO Pop Alamo, who was a

veteran of World War II and Korea, died in my arms,” Donlon said. “My youngest sergeant, Sgt. John Houston, was also killed. What was special about those men? One was the oldest, one was one of the youngest. Both had wives back home with children. Both were expecting. And when the medic told me they were killed the first thought in my mind was ‘Why God? Why them and not me?’”

When he eventually saw the enemy weakening, he left his sheltered position, and moved from place to place around the camp, throwing grenades and inspiring his men to keep up the fight. As he did this another mortar shell wounded him in the face and body.

As daylight broke, the enemy retreated back into the jungle and the wounded colonel reorganized his defenses and administered first aid to his soldiers.

He told students that he attributed his ability to stay calm in battle to the foundation in the faith his father and mother gave him, instilling in him the practice of a daily Rosary from a young age.

So when you watch the World Series tonight, salute Roger Donlon — a true American hero.