You Don’t Need to Understand God 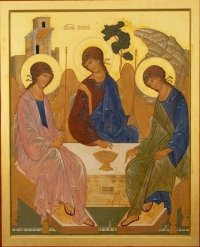 This Trinity Sunday (Year B) I will be thinking of a visit Mormons made to my home 16 years ago.

We were living in Virginia at the time. I chatted about the faith with the two “elders” h— and they scoffed at the very idea of the Trinity. It was illogical and silly, they said. We are supposed to become more like God, right? Sure, I said.

“Well if we can’t understand God, how can we become more like him?” they asked.

My 2-year-old daughter happened to walk in at that moment.

“You’re going to be a woman like mommy, right?”

“Olivia, tell these men what a woman is.”

“She doesn’t understand what a woman is, but she is going to become one,” I said.

We human beings always have to be reminded that we can’t understand God — and that’s okay.

Moses reminds his hearers of that by piling on questions in the first reading today: “Did anything so great ever happen before? Was it ever heard of? Did a people hear the voice of God speaking from the midst of the fire, as you did, and live? Or did any god venture to go and take a nation for himself?” Like God himself, the Holy Trinity is a mystery — not in the sense of a mystery novel, but in the sense of a “mystery of the Rosary.” It is a sacred reality so immense we can only contemplate it, never fully grasp it.

In the case of the Holy Trinity, God has left some traces of his Trinitarian being in creation and in the Old Testament, says the Compendium of the Catechism, but the Trinity as we know it was definitively revealed by Jesus Christ. Our children should know how to answer the basic questions about the Trinity: How many Gods are there? One. How many persons in God? Three.

But the fact is, we don’t know much more than our children about the Trinity.

But they don’t at all the relationship that the Persons have with one another — a relationship in which “the Father generates the Son; the Son is generated by the Father; the Holy Spirit proceeds from the Father and the Son.”

The best answer to the Trinity is that of Blessed Elizabeth of the Trinity, who lived from 1880 to 1906. In her famous prayer, she does not attempt to understand the Trinity. She only surrenders:

“O, my three, my all, my beatitude, infinite solitude, immensity in which I lose myself, I surrender myself to you as your possession. Bury yourself in me, that I may bury myself in you until I depart to contemplate in your light the abyss of your greatness.”

Her prayer is like my toddler’s sentiment toward her parents: The toddler doesn’t understand the love of her parents, but she knows she is loved and accepts it. Her relationship does what it does for Paul; it makes her cry “Abba, Father!” And, despite her lack of understanding, she slowly becomes more like them.

We are called to enter into the Trinity’s love, not to fully understand it. And we are also called to spread that love in Christ. In today’s Gospel, Jesus assures us that “all power in heaven and on earth has been given to me. Go, therefore, and make disciples of all nations, baptizing them in the name of the Father, and of the Son, and of the Holy Spirit, teaching them to observe all that I have commanded you.”

We do so not as individuals, but as members of Christ, incorporated into Trinitarian life.

“And behold, I am with you always, until the end of the age,” Christ reassures us.

That is all we need to know, whether we understand it or not.