10 Words of Wisdom From a First Amendment Defender 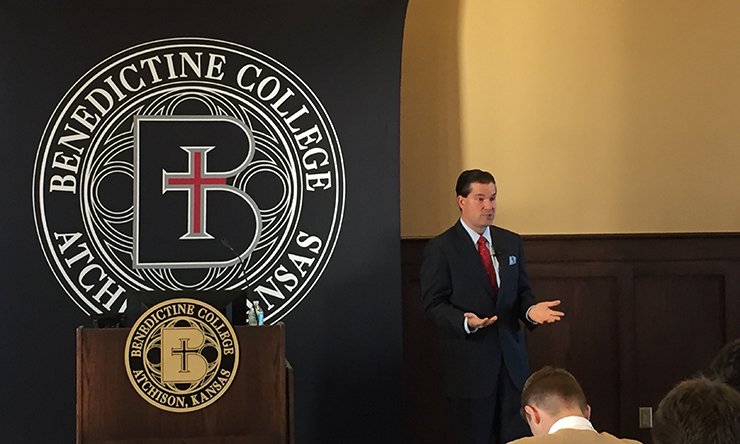 Meet a lawyer who thoroughly lives his Catholic identity in public life.

Eddie Greim, one of the leading First Amendment attorneys in Kansas City, spoke to Gregorian Fellows Oct. 24 at Benedictine College in Atchison, Kansas. Eddie is a partner in Graves Garrett and focuses his practice on complex commercial and securities litigation, internal investigations and whistleblower claims, and free speech and election law.

He has represented clients who were targeted by the IRS for their political views and successfully defended groups accused of thought crimes for their support of Gov. Scott Walker in Wisconsin.

At Harvard Law School, he taught on the Board of Student Advisors, received the Dean’s award for leadership and served as the President of the Harvard Catholic Law Students’ Association. He is one of the founding members of the Catholic Lawyers Guild in Kansas City, where he lives with his wife and five daughters.

1: Some of the most famous biographies of famous people were not attempts to tell the story of these people but to find moral lessons in their lives. They were leadership lessons. Your class is doing something akin to the great works of Western Civilization.

2: Leadership can be learned. It is possible to improve yourself as a leader. It’s not just a natural thing that some people have and some people don’t.

3: Having a single goal can be a form of laziness, when it consumes everything else you are doing. 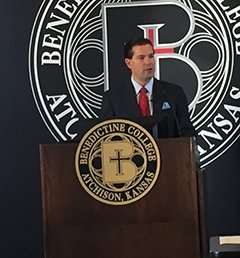 5: People artificially limit their horizons. They decide that leadership or purpose is something that can only exist on a grand scale. That’s a mistake. What you are actually doing is training yourself not to be a leader. You are removing those habits.

6: Others do see themselves as acting on too grand a scale, too grand a stage. They are focused on things that are important to them, but they probably let friends and families fail.

7: It’s not enough to go out on your own without the help of God and find a purpose on your own. Our own self-interest will steal in and capture our thinking without us knowing it.

8: I had a conversion moment in law school. I had started in Harvard in 1995. The stress pushed me into regular Mass attendance. It was a first step. It was a coping mechanism. The Psalms and Gospels spoke directly to me.

9: Morally, questions had to be resolved not based on natural law — on what’s right and wrong  —  but on a neutrality principle. The idea is you minimize harm to the rights of individuals. That’s a tempting philosophy … but it leads to dangerous places. For example, it leads to the idea of an abortion license, and to strict limits on the Church and on speech. It ultimately leads to severe restrictions on our own freedom to decide what is right and good and true.

10: The ever expanding scope of government, is setting up these battles that are very hard for people of faith to win. I think the idea of taxing churches, getting rid of favorable tax treatment for churches, is probably next.