Dispatch: At a Refugee Camp, Jesus Says ‘Feed Them Yourselves’ 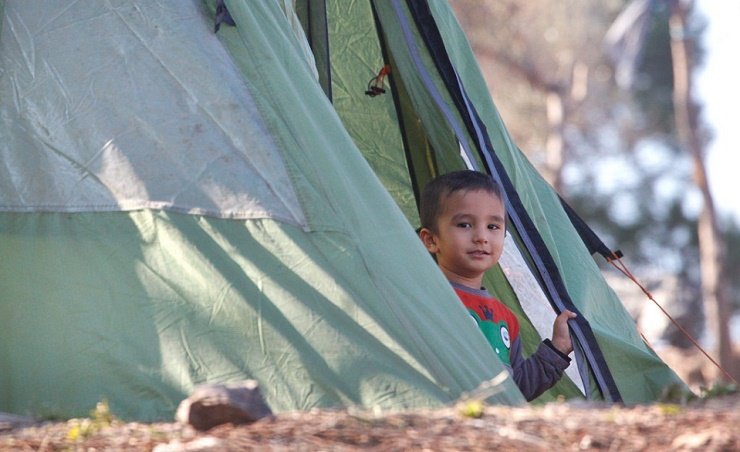 Sometimes a Gospel passage just rams into you. Other times you ram into it. This experience has been of the latter variety, the rarer of the two in my life. The Catholic Church in Greece follows the Greek Orthodox date for Easter, so my first Sunday here, July 3, 2016, was Corpus Christi. The Gospel passage was the feeding of the five thousand from Luke’s Gospel. I rammed into it twice that day. I’ll start with the second.

Walking back into Mytilini (the small but proud capital of Lesbos, roughly 30,000 people) you pass a small shrine with a mosaic of St. Paul standing on a map of Lesbos. I teach New Testament Greek (which has not been much of a help with spoken modern Greek, unfortunately, but has let me decipher some signs) so I was able to pick out a reference to Acts 20:14, which speaks of Paul making a stop in Mytilini, which was a busy port as far back as recorded history, on his way to the nearby island of Chios. (The present parish priest for all of Lesbos also has the island of Chios as his parish.) But the passage is from that section of Acts where the narrator subtly shifts from “they” to “we.” So, wow, St. Paul was right here where I am standing. But, even without a mosaic to tell me, so was St. Luke, the only evangelist who was a native Greek speaker. And I had just heard his words about Jesus feeding the five thousand.

The Gospel records Jesus’ words, “Feed them yourselves.” And when I heard it at Mass, I knew that would be my job two hours later, even down to the picking up the leftovers and putting them in baskets. Ran right into that one.

If clothing distribution is emotionally draining, food distribution is physically so. The camp presently is divided into five sectors for food distribution purposes. The food arrives in a small van which goes to a central location in the camp, about 150 yards from where the tea is made and served, which we call the “chai place.” During Ramadan, a typical lunch was a small loaf of bread (think a footlong sub) and a plastic container, roughly 5×7 inches, containing 200 grams of something. Meals have varied fairly little. Lunch or dinner is about them same: potatoes and okra, potatoes and eggplant, potatoes and green beans, potatoes and scrambled eggs, chick peas, and only twice in the thirty or so meals I have served thus far, small bits of beef and, you guessed it, potatoes. During Ramadan, RHU’s with pregnant women were also given, at lunchtime, what is called “salad” but which amounts to a plastic bag with a tomato and a cucumber. But during Ramadan, many people were fasting, so lunch went fairly quick, and fairly quick is 30-45 minutes.

For dinner, during Ramadan, there was “salad” for everyone, bread, the “potatoes and…” meal and also a cup of garlicky Greek yogurt, which, given the rarity of meat, is the main source of calcium and protein. Two juice boxes per person were also given out.

Since Ramadan ended around July 5, lunch has now included salad for all, and dinner has been the same, but now it’s down to one juice box per person, because food money is running short. More on that later.

So, now we are at the food distribution point in the middle of the camp. The HSA volunteer in charge of food, a 25-year-old Colombian-born Swiss citizen named Santiago (with the patience of a saint) divvies the different meal crates up so that each distribution team has enough for each route. Each crate has roughly 130 meals.  The meal and salad crates are about 60 to 65 pounds each. They are carried between two people, or if we are short of people or muscle to distribute, someone gets in the middle and two crates are carried by three people over the rocky uneven ground along the different routes.

Two people in each distribution team wear plastic gloves (which in this heat is pretty awful) to hand out bread and plastic forks or spoons. One volunteer carries the list, which lists the RHU number, the number of meals to deliver, and some other details, such as whether there is a pregnant woman in the unit, as well as a helpful list of the numbers one to ten in Arabic.

The teams divide and go down the routes, stopping at three or four spots (usually the heads of different lanes along which the RHUs are situated). One person does the list (and maybe spoons or forks) another bread, another “salad,” another, the meals, maybe double duty if there is yogurt. Sometimes the meals are fairly hot. It hurts to carry a stack of six of them.  The list person knocks and makes sure the residents are at home, calls out the number, and each person goes back and forth to the crates and brings the food. It can take more than an hour to give out dinner.

Carrying, bending, stacking, carrying, delivering, returning, moving the crates to the next way-station on the route. I have gotten pretty good at routes 4 and 5. I pretty much know how many people are in each RHU, and it’s great to see the same people. If the RHU is closed, we cannot deliver food. But if a neighbor opens it, it is OK. This often happens, since the neighbors know that the family is at clothing distribution, or visiting someone at the Moria camp, or even at the hospital.

Kids love to help with food distribution, but they are not allowed. Some teenagers (16 and older) are permitted, but food goes slower because you have to keep telling these gorgeous little urchins not to help. Hygiene issues aside, if we let children help, other NGOs may well complain saying HSA forces children to do their work. The truth is we forced them not to help. “You, Eddie, no good” hurts from those disappointed eyes.

The people are very thankful for the food, even when you get that “wow, eggplant and potatoes again…” look. But they are not interned here. Some go and buy food outside the camp, just to break up the monotony of it. There are a few food trucks right outside the camp which are making a welcome windfall in this awful Greek economy. A few lanes have mini fire pits where some cook. It’s posted that it is against the law to have open fires from May to June here, but nobody seems to say anything. They often use the “potatoes and…” and mix it with something they have bought.

When the route is over, it’s back to the food distribution point to make sure all routes are done, and to repack any leftovers, to tell Santi of any adjustments to the list (people have moved to a different RHU, new arrivals to camp). These he verifies with camp management, as well as weighing some random food samples to make sure it’s 200 grams so no money is wasted.

After carrying all the crates and any leftovers back to the chai place, we volunteers tuck into the meals if there are enough left over. (Only once in two weeks was there not enough.) Santi finishes his paperwork. He is often the last person in the camp to eat.

Again, I imagine myself in their situation. Monotony. No choice of food without spending the limited cash you have and which you are rationing for God knows how long until you get your asylum and head to God knows where. If you are a vegetarian, you better love cucumbers and tomatoes. It would help to know twenty different ways to prepare them.

So that’s the food situation thus far. It is funded by the NGO Oxfam and prepared in Mytilini by a food service.  But we were told that in two days all that changes. The Oxfam meal ticket ran out. At our Monday HSA meeting with all volunteers, we were told that food is over by Thursday. It was suggested that female volunteers don’t come on Friday the 15th, since who knows if a riot could break out. But in the last two days, HSA is negotiating with another NGO for food service. It may be cooked in the camp. Details are sketchy to the lower-rung volunteers like me, since I (thankfully) don’t  go to the meetings where the different NGOs discuss big picture items.

I am more thankful than ever for my daily bread. By the time I’m ready to eat, I am drenched with sweat. I have eaten like never before from the sweat of my brow. I also appreciate more than ever that everything I have ever eaten has been a marriage of nature’s dirt and human sweat.

Kara Tepe camp is an olive grove on the slopes above the bay north of Mytilini. A mount of olives, if you will. And once again the age-old question, “How will we get food to feed so many?” And we scratch our heads and calculate how many days’ wages. “On the mountain, God will provide.” And we ram once again into the Gospel, because this is going to take a miracle.