Dispatch: Imagine You Were a Mom in My Syrian Refugee Camp … 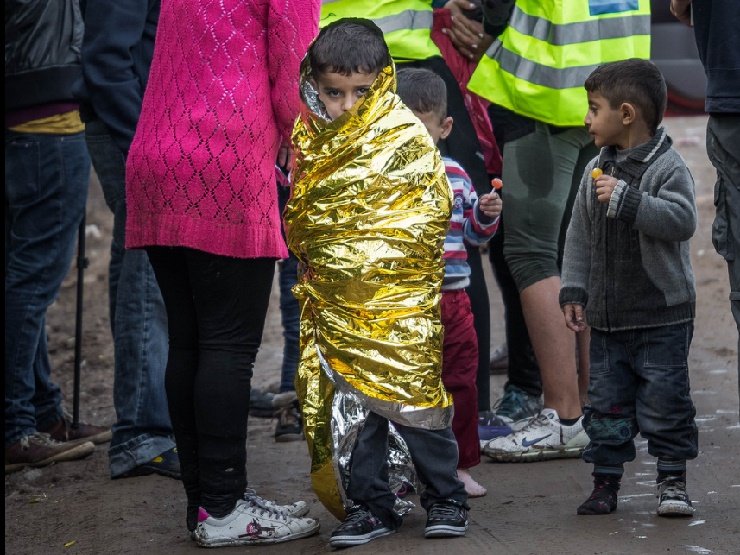 Try this one on for size. (That’s a pun, eventually; read on.)

One of the most frustrating duties at the Kara Tepe camp for refugees on Lesbos is clothing distribution. It is frustrating for volunteers and forced migrants alike. Twice over the past three days I had to walk into the oven which is the container where the sorted clothing is stored just to wipe tears of frustration from my eyes.

So, especially for the ladies, imagine yourself in this scenario. You have fled from California to Texas because radicals are killing every good person you know and your family is unsafe. You somehow got to Galveston, (I am following the same example from my last dispatch) and floated to safety to Grand Cayman. Now you and your family are stuck. You don’t know whether your request for asylum is going to be granted and you wait. And you wait. You have come with the shirts on your backs and little else. You have been at the camp already for two months. Whatever clothes you do have you are washing by hand and hanging from rigged-up ropes next to your housing unit, which has a door, four tiny windows, 250 square feet of living space, subdivided by more ropes and draped blankets, and maybe you were lucky and scored a camp mattress or two. But, good news! Three weeks ago you were able to line up and get an appointment-ticket for clothing distribution. Today is your big day!

Now, you are used to shopping at Target or Kohl’s or whatever reasonably priced place back in California. But now a smiley Middle-Eastern guy named Mahmoud sits you down, takes your RHU number, family name and the individual names of each family member. He deals with you one by one, asking what you need. You can get one short-sleeve garment, one long-sleeve, a bottom (long or short pants), one undergarment and, if you prove your shoes are damaged beyond repair, shoes. You will probably get flip-flops too since a donation just came in, but they are flimsy and since the camp is all rocks and large rough gravel, they won’t last 72 hours. Oh, and Mahmoud speaks about eight words of your language — six of them are numbers — but he’s adding an expression or two each day. He has been volunteering on Grand Cayman for five days and this is his third day doing clothing with families.

So, mother of five, you manage to tell your volunteer that you need something short sleeve. After all, it is averaging 93 degrees this week. He disappears into a white trucking container (averaging about 113 degrees despite a small fan in the back) and brings out four garments for you to choose. Three are either too big or too small (Mahmoud is not a fashionista) and the one that you could fit into is a kaftan, a long Middle Eastern dress you have only seen in the movies or on the news. You would rather die than wear it. Your teenage daughter, who is hell to shop with in the best of conditions, hasn’t ceased being persnickety just because she is living an ongoing traumatic event. She’s worse. She sits there glaring, rolling her eyes at everything. And some of what they bring out to her is corduroy anyway since tons of donations are wintery clothes. So this is the big day you waited three weeks for. You do choose something and Mahmoud high fives himself on the way back to the container, overjoyed that someone took a shirt 40 people had rejected in the previous three days.

What I am getting at is that you need to walk a mile in these people’s moccasins (actually, most are wearing Crocs now because a big donation came in, and they’re as ugly and smell as bad on Lesbos at 95 degrees as anywhere else.)

OK, you’re from Syria and it’s not Mahmoud, it’s Eddie Mulholland helping you with clothing and he brings out clothing donated by well-meaning people way outside your cultural realm, who dress way outside your religious tradition, maybe people whose country you have heard called the Great Satan, whose women wear lower necklines like the one you just shook your head “no” at. And then, after an embarrassed silence, you, a beautiful and dignified Muslim woman, manage to communicate to Irish-American Eddie that, well… you need a bra. And he, sighing with relief, gets a female volunteer, who is helping another family, to help you and thus spare you the one indignity you can be spared today.

And then you see a family knocking at the clothing distribution enclosure with an emergency ticket, because they were lucky and want to get some clothes for their trip to Athens to get interviewed for their asylum claim. And one lucky person happens to find shoes in his size, which is a rarity unless you really love size 8 orange Crocs.

At the end of all this, there are lots of people waiting because your clothing appointment has lasted a bit over an hour, and you sign the paper saying what you were given (so you don’t go asking for shoes again 3 weeks later if you just got them) and you head back to your RHU with a shirt you would happily throw into a donation bin yourself and one pair of underwear close to your size, and your daughter who has gone from fuming to whimpering.

And even when he stops crying, he muses that “refugee” is a French word and a passive (not active) verb form. You did nothing to deserve this. This was done to you by horrible people. He also knows that when you get to your eventual destination, if you ever do, people will fear you and be unwelcoming to you because they will lump you in with the bastards who did this to you, probably because you wear the same weird clothes they do.