Dispatch: When a Refugee Camp Is Better Than What You Left Behind … 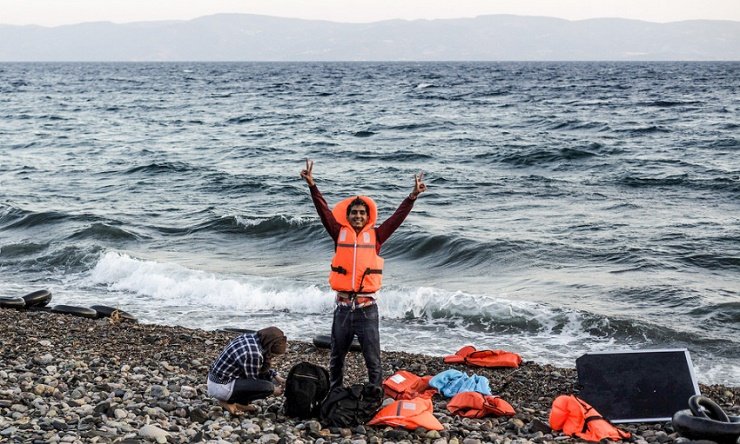 The other day a bus of tourists pulled up in front of Kara Tepe, the refugee camp I am volunteering at, for people to gawk at the entrance and maybe catch a glimpse of a refugee. It disgusted me. Have we come to this? That these persons whose freedom has already been violated by monsters have their dignity offended by tourists snapping photos of some rare human specimens?

Curiosity is one thing, but would you sell tickets to your grandfather’s heart operation? Charge your friends to have lunch with your exchange student? I hope not. This camp is many things. One thing it is not is a tourist attraction.

This is a crowd of people, for sure. During my month here, the camp population has fluctuated  between six and seven hundred. That’s a crowd. But these are individuals. They have faces. And, especially as Christians, if we are to believe the beautiful poetry of Fr. Gerard Manly Hopkins, SJ, we know that Christ “plays in ten thousand places… lovely in limbs not his, to the Father, through the features of men’s faces.”

Here are some faces in the crowd, snippets of stories you would not wish on your worst enemy, of people with whom we in fact share a worst enemy: the evil brought by man against man.

We spoke already of Faris, a former shop owner until ISIS blew it to smithereens and generally a pretty upbeat guy. Today he was looking downcast by the chai house. When asked if anything was wrong, he said, “Big problem.” The big problem turned out to be a friend back in Syria contacted him to tell him that his friend’s home had been bombed (by Russian planes, he says) and his friend’s four children were killed. He is worried for his friend since he is convinced he will never leave Syria and is in imminent danger. I hope that puts into perspective any “big problem” you have today. And yet Faris reiterated his invitation to a meal. Nothing cures human indifference better than solidarity. And when the rice is as good as the rice the other night, it cures it fast.

There is Sajab, an Afghani sound technician who “ran into a security problem,” and won’t say more. He explained to me that he spoke Dari, one of the main languages in Afghanistan. The other is Pashtun. I remarked that no one at the camp seemed to speak Pashtun. He laughed and said, “All the Taliban are Pashtun, it’s the people who speak Dari who have the problems!” I winked and said, “Security problems?” he nodded and couldn’t hold back a broad smile.

There is Petit Jean, a 13-year-old boy from the Congo whose family went to Turkey as a way to cross over to Europe. Since they are considered economic rather than political asylum seekers, they will have a harder time in Athens. He was the boy with the Kansas City Royals shirt that caught my eye. It was also orange and green, so you know where the off color gear from your favorite team ends up.

But by far the most bizarre story I have come across this week is the story of four women who arrived in camp a few days ago. They are from the Dominican Republic.  Yes, you read that correctly. They are from a country in the Caribbean. How in the Sam Hill did they get on a boat to Lesbos?

They were looking for work and were contacted by a man from an agency that hires people for work overseas. They were to go to Turkey for a new Caribbean-themed restaurant. They got to Istanbul and worked helping get the locale set up. Things started looking a bit off. They spoke to each other and shrugged things off. After all, homesickness makes you weary and time would help cure the oddity of it. But no, another girl somehow got a message to them saying that what there were preparing was a place of prostitution, and that they were about to be forced into a very bad situation. There was some sort of mafia behind it all, and they had to make a run for it that very day.

They didn’t have their wallets or passports with them, and they had no idea whom to trust, so they didn’t even try to find their country’s embassy. They just ran away. A week or so later, they were floating across to Lesbos and became Kara Tepe’s newest residents, with the exception of the newborn from yesterday.

Human trafficking is real. It is insidious. These women had the courage and the luck to make a run for it. Many others aren’t that lucky. But even the future for these new friends is not completely certain. They are playing the waiting game like everyone else. They did ask me one thing that I could answer. They want to go to Mass on Sunday. Lucky for all of us, there is Mass on Lesbos every Sunday this month (it’s not always the case), and I’ll make sure they have a way to get there.

Here the faces in the crowd are not a list of achievements, but a smattering of tragedy and terror. There is a brotherhood in pain. Everyone knows that everyone else must have a tragic story or they would not be here.

By the port in Mytilini there is a statue of a woman with arms aloft holding a wreath. “We have a Statue of Liberty too” one of the locals told me jokingly. The wreath is from Mytilin, represented as a woman, to her fallen sons in the conflict with Turkey 1919-1922.

The statue faces the port and sits right opposite where the ferry leaves for Athens. Every afternoon I see refugees sitting on the statue steps and looking at that ferry. Some wave farewell to friends who got the lucky ticket to the next stop on the journey. Some just watch and wait, steeling their faces for another day, faces an inhumane tourist bus will never distinguish from the nameless crowd.