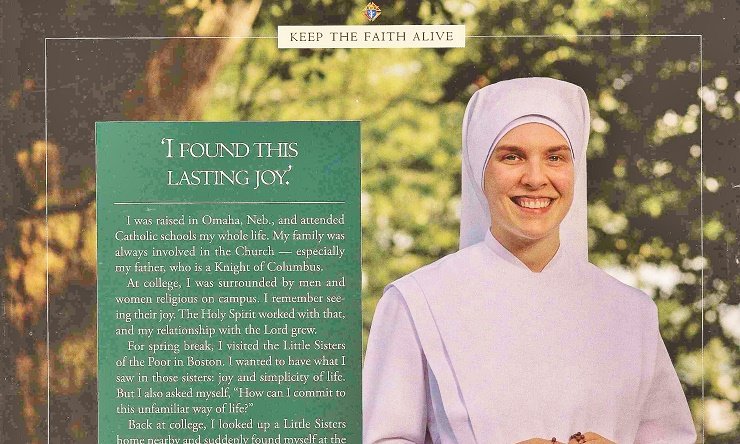 A Benedictine College graduate is featured on the back of Columbia magazine, the Knights of Columbus magazine and the nation’s largest circulation Catholic periodical.

Megan Spelic graduated in 2013 as a journalism major and after joining the Little Sisters of the Poor took the religious name Bernadette Rose. She has been active with the college since then, creating a Benedictine College quilt from her Raven gear to raise money for other students with religious vocations.

In the Columbia vocations feature, Sister Bernadette’s testimonial credits Benedictine College with her vocation: “At college, I was surrounded by men and women religious on campus. I remember seeing their joy. The holy Spirit worked with that, and my relationship with the Lord grew.

One Spring Break, she visited the Little Sisters of the Poor in Boston and liked what she saw. But she still thought their way of life was out of reach for her. Until she returned to Benedictine.

“Back at college, I looked up a Little Sisters home nearby and suddenly found myself at the home every weekend. I could not stay away. I found this lasting joy that keeps surprising me, especially in the poor elderly whom I encounter every day.”

Readers may remember Sister Bernadette from Pope Francis’s 2015 visit. When he visited the Little Sisters of the Poor who were battling for religious freedom against the HHS Mandate, she was one of the small number of sisters who met him.

She said she was waiting for the canonization Mass of St. Junipero Serra to start when her superior got a text message saying that the Pope would be visiting their house in Washington, D.C.

That night at 6:45 p.m., police cars and flags filled the street and Pope Francis arrived in a Fiat.

“He just walked through our chapel doors and there were probably 35 sisters ready to greet him,” she said. “He made his rounds to every single one of us and took time to talk to us. Each of us. We even have this little Columbian sister who is 102 years old. He asked her if she still likes wine. She said ‘No, no, no! Only café.’ He smiled and said ‘Very good. Me too.’”

When it was Sister Bernadette’s turn, she said, “Hello papa. We’re praying for you.”

“He looked at me and smiled,” she said. “I held the hand of the successor of Peter, and his gaze was like Jesus looking into my soul.”

She appreciated the quiet, familiar visit. 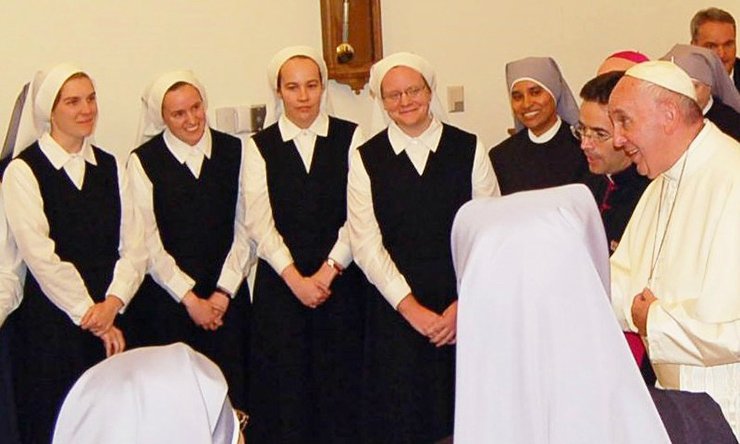 “When I watched him going into all these crowded, loud atmospheres, taking selfies with teens, meeting kids in Harlem, it really made me appreciate what we had,” she said. “Our meeting was just so intimate. That’s the word that keeps coming back to me. It was so intimate.”

She had words of advice for students at Benedictine College.

“Stay up to date on the Holy Father,” she said. “I look back and think about the monks and sisters and the education. It has really prepared me for religious life in general, and the contemplative life. Having all that prayer time and all that time to go to Mass and the atmosphere on campus prepared me so much for life after Benedictine. I don’t regret anything about Benedictine.”

Little Sisters of the Poor, Vocations