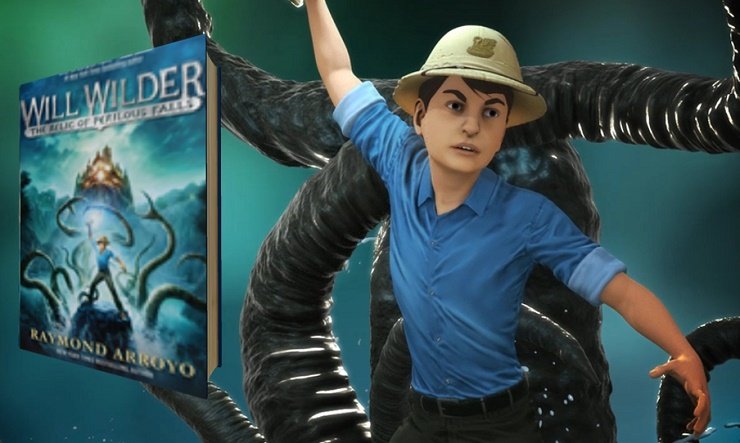 “Stay in non-fiction if you can, my friend,” he wrote to me in an email, interrupting his work on a third volume in his new young adult adventure series. “It’s much more manageable. I find as these characters mature they become unruly and start moving in their own directions. It’s like trying to manage a binder full of teenagers.”

I’m hoping Arroyo’s own books convince many Catholic writers to ignore Arroyo’s warning. I don’t want to overstate what Raymond Arroyo has done, but it will take all my powers of restraint to avoid it: I hope he has begun a revolution.

I just finished Will Wilder: The Relic of Perilous Falls, the first book (the second is available for pre-order) in the series Arroyo has glibly described as “Dennis the Menace meets Young Indiana Jones in the Exorcist.” The story is excellent. I even like the aspects of it that some have criticized. More on that in a moment. First, let me talk about the revolution.

One of the most life-changing classes I ever took was called the 20th Century Catholic Literary Revival. It introduced me to the greats, including Flannery O’Connor, Gertrude von Le Fort and Evelyn Waugh. These are Catholic writers for the ages, crafting art that demands, and stands up to, a high level of literary analysis.

Just ask Stephen Mirarchi. He teaches Catholic lit at Benedictine College, does original academic work in support of it, and even does a great job promoting it to popular audiences.

All the same, when class (or book club) is over and it is time to unwind, I find myself turning not to the Catholic greats, but to “fun reads” —  popular fiction by authors of no particular faith perspective.

It was not always this way. Some of the great “fun reads” of history were written from a distinctly Catholic perspective. Robin Hood was a rosary-praying outlaw who had Friar Tuck with him in the greenwood so that he wouldn’t miss confession or Mass. Don Quixote poked fun at the tradition of chivalry, but also helped establish the novel as a literary form, and give it a Catholic flair.

However, in our day, popular fiction that dwells on Catholic imagery is far less likely to edify. Books like Umberto Eco’s The Name of the Rose and Dan Brown’s The Da Vinci Code, Angels and Demons and Inferno use their Catholic settings to thrill, but also to disgust, their readers.

There are some notable exceptions to the rule — and you will find a handy list of them in the endorsements of Raymond’s book: Dean Koontz, Frank Cottrell-Boyce, William Peter Blatty, Mary Higgins Clark. These are all practicing-Catholic popular fiction writers.

What is different about Arroyo is that he is not just a practicing Catholic, but strongly identified with the faith. He is the best-selling author of Mother Angelica: A Network of Miracles and he is the news director and lead anchor at EWTN.

His book is a truly “fun read.” It is part comic novel, part treasure hunt, part thriller, and part social commentary. It is dark and dangerous enough to capture the attention of middle school boys, but kept light enough to win the approval of their moms.

The book has received rave reviews from both Catholics and non-Catholic audiences, but some readers criticize it as formula fiction. I actually like that about it. I teach my classes about formula fiction by reading John Zmirak on Dan Brown. Then we go through the “blockbuster formula” he uses and notice something interesting: It is a description of the Gospel.

“The formula” requires a shadowy powerful villain network, a specially empowered hero who must fight against both tradition bad guys and “good” guys, and a beautiful woman who fights alongside him. This is Jesus vs. the devils and the Pharisees with Mary on his side. It’s also the story of Will Wilder, with some fun twists on the old formula.

I also don’t mind that Arroyo uses the fundamentals of the faith in a very — elastic — way. But this is what fun reads do. His use of relics and demons and seers and “summoners” is no stranger than, say, St. George and the Dragon. Like the old Catholic tales, he uses fantastic elements to draw attention to faith fundamentals.

But what excites me most about the book is what I hope will follow it. Volumes 2 and 3, for starters. But more to the point, I hope more Catholic writers will be inspired to tell spellbinding stories that reach a popular audience.

I hope for a faith-filled fun read revolution.