Into the Storm for Life 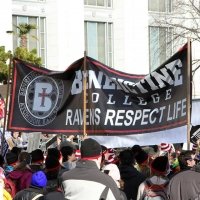 The weather and emotions for Benedictine students and Gregorian Fellows during this year’s March for Life started out pretty cold.

It was a whirlwind 63 hours, 48 of which were spent on buses. Benedictine’s annual entourage arrived in Washington, D.C., stayed for 15 hours, and turned around and drove back to Kansas. Without being able to attend the March.

None of us will be naming a son or pet “Jonas.” The word “Jonas” now elicits groans, eyerolls, and feelings of anxiety and frustration for all 300-odd students, faculty, and staff who ventured into the night to support the pro-life cause by turning out in our nation’s capital, only to be turned away by the elements.

Heading back to campus, I felt like a soldier in a defeated regiment returning to camp after a disaster of a campaign. The Charge of the Light Brigade started reciting itself in my head – “Theirs not to make reply / Theirs not to reason why / Theirs but to do and die / Into the valley of Death / Rode the six hundred.” Of course we were not on par with the Light Brigade, or any brigade, but for a moment we felt like we were.

The atmosphere on the buses was bleak. No one complained out loud, but the thoughts were written on stony faces and spoke through slouches. We all understood why we had turned back so soon, and no one blamed anyone but Jonas, but we couldn’t rationalize our anger and frustration away entirely.

Granted, no one goes on the March for Life for a good time. No one wants to spend 48 or more hours on a bus, 24 at a time. People avoid the March because of the buses. Everyone who signs up tries not to think about the ride. Even the March itself is not fun – it’s freezing, you’re hungry, you’re tired, there are people yelling at you, and you have the return trip looming ahead of you like the shadow of the Capitol that refuses to budge on national abortion laws.

But the trip has its perks: You get to be physically part of a movement – figuratively and literally – that is hundreds of thousands strong. You get to make a physical, tangible quantifiable point for something you believe in. You have some free time to tour the capital of the United States of America. You can visit friends and family who live there. You get to brag about the fact that you survived the bus trip. You’re energized and pumped up for the pro-life cause and for your own life. You feel good about yourself.

There were no perks this year. We did not feel good about ourselves. We felt defeated and deflated. We were completely robbed of all energy and positivity. We were listless and unfulfilled. Smiles were fleeting and laughter was short-lived as the pervasive gloom ate all glimmers of joy.

Every year, a couple hours out of D.C., those who feel called to do so make their way up to the front of the bus, take the microphone, and share any experiences or thoughts they may have had during or about the March.

We did the same this year, but of course it was not the same. Only a few people spoke, and it was mostly “look on the bright side, everything happens for a reason,” but one student made a different point.

He mentioned that a lot of students were encouraging each other by saying, “there’s always next year,” but he noted that that isn’t the point. “We march so we don’t have to march,” he said. “We march so there won’t be a ‘next year.’ Maybe this is a reminder of what we’re really fighting for. Maybe this is the beginning of the end.”

In my cynical mood, under the cloud of gloom, charging head-first into the northern edge of Snowzilla, it seemed like wishful thinking. But I knew he was actually right. As I collapsed on my bed 20 hours later, I said, “Jesus, I know everything happens for a reason. I have absolutely no idea why this happened, why the storm couldn’t wait until after the March, but oh well. I really cannot see the point to this, at all, but let me figure it out someday. Even if it’s not for years. But preferably sooner rather than later.”

The next morning, in the Sunday homily, the March was brought up. The straggling survivors sighed at the name of Jonas, and we resigned ourselves to hearing about it once again. But it was not what I was expecting.

“A picture has been widely shared on social media,” the priest said, “of an altar carved out of the snow on the side of the highway, with Mass being said on it for those stranded coming back from the March. The March for Life never gets a lot of press, but because of the storm, it has received more than ever this year. Perhaps that is the good that is meant to come from all this.”

I thought about it as I walked home. Perhaps the storm was also a reminder of why we March. It is not so we can feel good about ourselves. It is not supposed to be for us. It is a sacrifice, and if we were mad about how much of a sacrifice it turned out to be, then we went into it with the wrong mindset. God can accept and use our frustration and disappointment as a prayer to end abortion, just as much as he can use a massive crowd traipsing through Washington to the Capitol Building.

Next year – if there needs to be another March – we will have a better realization of what we are doing and why. But hopefully it has better weather anyway.