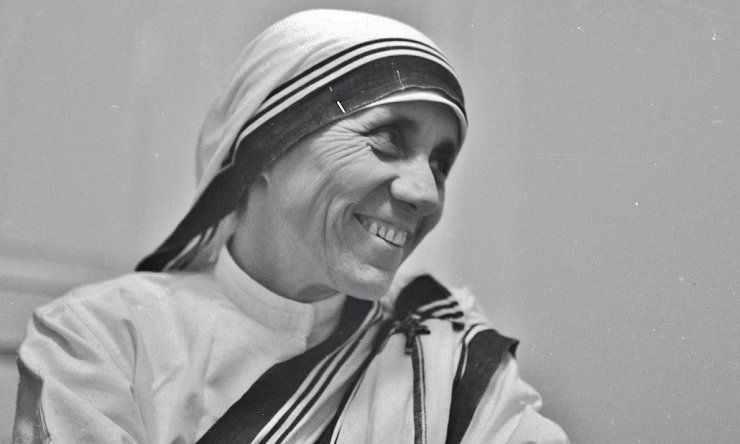 Mother Teresa couldn’t make it to my wedding, so she dropped us a quick note to share what she would have said if she were there.

Actually, it was my wife, April, who invited her. She also invited the president and the pope. George and Barbara Bush sent a mass-produced card. The Vatican sent a blessing. But Mother Teresa sent us a personal response, a typed page with at least one mistake (an “s” is typed over with an “a”) and which she signed at the bottom.

In these days leading up to her canonization, much attention is being paid to the big, grand moments of Mother Teresa’s life (at my day job, Benedictine College is going big for her). But for us, this intimate contact with her is what means most.

What she wrote to us comes directly from her own biography.

“Welcome children into your wedlock and help them grow up to be the sunshine of God’s love in your family and in your neighborhood,” she said.

This is exactly what her dad did for her. “Her father was very much a role model. He had a big influence on her,” an Albanian diplomat who knew her and mutual friends told the Washington Post.

“My little daughter,” her dad told her as a child, “always share even the least bit of food you have with others, especially with the poor. Selfishness is a disease of the spirit that turns us into servants of our riches.”

But his words weren’t his greatest lesson. Her home was the site of many political events, and her dad would begin them by showing off his daughter’s voice. Agnes was a “wonderful soprano” who would sing the beautiful Albanian song “At the Lake” for guests.

She never left the path her father set out for her. She spent a lifetime rooting out selfishness, like her dad told her to, and standing tall in front of powerful men, like her dad taught her to.

“On your wedding day, you will receive many gifts – some very expensive ones also. But the most precious gift you will be receiving on that day is the gift of each other,” she said. “Keep the joy of loving each other and share this joy.”

Mother Teresa knows exactly what the gift of love can do for someone.

In 1946, Mother Teresa wrote down how Christ called her to go to India. The romantic notion that Mother Teresa loved the poor and rushed to serve them is false. She didn’t want to go. And yet she went.

Her postulator said that her Yes was rewarded with a “real, close, intense union with Jesus in 1946 and 1947.”

It’s hard to exaggerate the power of this “gift of love.” Her year of closeness to Christ transfixed and transformed her. And it’s a good thing it did. It was followed by decades of darkness. Her 50-year “dark night of the soul,” in which she lacked all consolation from God, was suffering of a magnitude hard to imagine.

“Fear not,” Jesus told her. “It is I who am asking you to do this for me. Fear not. Even if the whole world is against you, laughs at you, your companions and superiors look down on you, fear not. It is I in you, with you, for you.”

Remembering the early love experience of Jesus made her an “apostle of joy,” greeting the world with a smile, and telling others to do the same, even when she was answering correspondence late into night, including the invitation to the wedding of Tom and April Hoopes.

“From the first day of your life together as husband and wife, pray together,” she said. “For the family that prays together stays together in love, peace and unity.”

Through the grace of God and the intercession of one of his greatest saints, we have done just what Mother asked us to do. And by displaying her letter in our home, she has led others to this life of prayer as well.

We pray above all for the grace to do the one incredible thing a Christian can do that will shake the world to its foundations and leave the world transformed: Obey Jesus. Just like Mother Teresa.