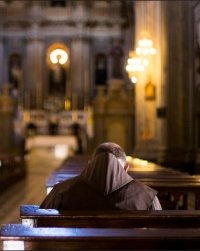 It is January and time for college students to return to class. College is a time when students see their assumptions challenged, their worldviews stretched and they hit a “reset” button on their understanding of the truth.

I see it every spring, and with the help of Rodney Stark’s new book, The Triumph of Faith, I will see it in a major way this year.

At most schools that worldview “reset button” means challenging a young person’s faith in favor of a secular worldview. But I teach the “Christianity and Mass Media” course at Benedictine College, where the opposite is more likely to happen.

The course has developed into a kind of SWOT (strengths, weaknesses, opportunities and threats) analysis of the ability of Catholics to communicate with the world. We start with our strengths, and that is the moment that students see their worldview challenged.

Most students think that the West and the rest of the world is becoming more secularized as it loses its blind faith in God. We used to read God Is Back by editors of The Economist and The Last Christendom by Philip Jenkins. Both books marshal impressive evidence to show that, in fact, faith is skyrocketing everywhere.

This year we are adding the 2015 book The Triumph of Faith by Rodney Stark, Jenkins’ colleague at Baylor, which adds a twist to the tale: he treats the belief in the triumph of secularism as the real “blind faith” in the world.

Citing the May 2015 Pew Research Center survey showing the decline of religion in America, he mentions an inconvenient fact: “The overwhelming majority of Americans who say they have no religious affiliation pray and believe in angels.”

He shows the long history of blind faith in secularism’s triumph, citing scholars’ confident predictions of the imminent demise of religion going back centuries. Meanwhile, he writes, “Surveys of more than a million people living in 163 nations show that

The book has its weaknesses — its liberal use of exclamation marks, for instance, gives it an air of sensationalism at times. But Stark is a serious scholar, the research he has collected top-notch and his analysis is very good.

He helpfully provides data showing what I have always suspected: Our sense that church attendance is declining is partially due to a false belief in a golden past. In one table he shows weekly church attention hovering around a third of the population from 1974 (36 percent) to 2014 (34 percent) — with the highest attendance in the 40-year time span coming in 2010 (37 percent).

He also explains the phenomenon of the “nones.” That is the often reported finding of religion polls since the 1990s that a growing numbers of people are willing to list “none” when asked their religious affiliation. First, he points out that this is not a decrease in religiosity, but a change in what the nonreligious people say about themselves. The size of the group that doesn’t attend church is the same — they just no longer name the church they are not attending. The nones represent a decline in nominal Christianity, not a decline in Christian believers.

But Stark goes on to point out another shortcoming of these surveys: Their low “completion rates.”

“When I was a young sociologist at the University of California, Berkeley, Survey Research Center, any survey that failed to interview at least 85 percent of those persons originally drawn into the sample was not to be trusted,” Stark writes. “The Pew survey of 2012 had a completion rate of only 9 percent.”

Why are response rates falling? No one knows. But it is clear that those who are taking the time to respond to surveys tend to be the less educated and less affluent — and this is the group that is least likely to belong to a church, contrary to what is often insinuated.

The book gives a great overview of the world religious situation, exposing myths about the faith in Europe (both historically and today), Latin America (good news: it’s not shedding its Catholicism the way we think; bad news: it was never as Catholic as we imagine), the Middle East, India, Japan and China.

Join my students and read it. E-mail me for the quiz questions.