Politics and the Four Sins that Cry Out to Heaven 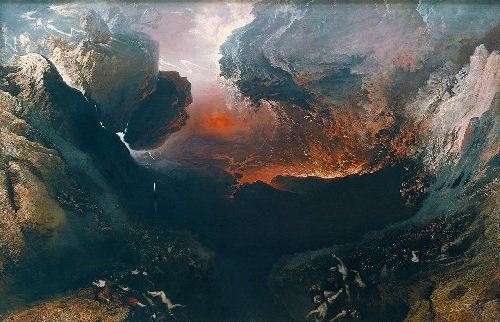 The Catechism lists four “sins that cry out to heaven” and it is a startling list if you think of it in terms of our political divisions.

First, the “blood of Abel” cries out to heaven.

The Catechism explains by quoting Genesis 4:10 where the Lord said, “What have you done? The voice of your brother’s blood is crying to me from the ground!”

The sin here is murder — but St. John Paul makes the blood of Abel an icon of abortion in his encyclical Evangelium Vitae, saying that too often “threats to life arise within the relationship between parents and children, such as happens in abortion or when, in the wider context of family or kinship, euthanasia is encouraged or practiced” (No. 8).

So if you are a die-hard, uncompromising, 100 percent pro-lifer, take comfort: You are in good company. So is God.

Second, “the sin of the Sodomites” cries out to heaven.

What, exactly, is that? The Catechism cites Genesis 18:20 and 19:13 to explain, but the New Testament sums both up nicely:

“Sodom and Gomorrah and the surrounding towns gave themselves up to sexual immorality and perversion. They serve as an example of those who suffer the punishment of eternal fire” (Jude 1:7).

Do sexual sins bother you a lot? They bother God a lot too.

Third, “the cry of the people oppressed in Egypt” cries out to heaven.

The Catechism cites the Exodus story here, which Pope Benedict summed up this way: “God is attentive to the cry of the poor and in return asks to be listened to: he asks for justice toward the poor, the stranger, the slave.”

Left-wing types are worried about worldwide poverty. So is God. Conservatives care too: The Economist cheers the global decline of poverty in our time and wants more of it. One thing the magazine admits, though, is that the global numbers mostly reflect the decline of poverty in China. Improvements there have come at a steep human cost, spitting up families to work in substandard conditions for low wages. In fact, the system creates and exploits new de facto widows and orphans, as captured in the documentary The Last Train Home.

Fourth, “injustice to the wage earner” cries out to heaven.

For this one the Catechism quotes Deuteronomy 24:14-15: “Do not take advantage of a hired worker who is poor and needy, whether that worker is a fellow Israelite or a foreigner residing in one of your towns.”

That sounds uncomfortably close to the situation in the United States where we “welcome” into the country an immigrant class that will work for lower pay. Immigrants are 13 percent of the U.S. population but make up huge proportions of our housecleaners (45 percent), taxi drivers and chauffeurs (37 percent); meat processors (37 percent) and grounds workers (35 percent) according to the Center for Immigration Studies.

The Catechism also quotes the Letter of St. James 5:4: “Behold, the pay of the laborers who mowed your fields, and which has been withheld by you, cries out against you; and the outcry of those who did the harvesting has reached the ears of the Lord.” It is hard to read those words and not think about America’s underclass of migrant farm workers.

Does it bother you that our lifestyle is made possible by an underpaid lower class? It bothers God too.

The list is a wake-up call to both conservatives and liberals in America.

When it comes to these very issues, we often look at each other in bewilderment, wondering how the other can tolerate the sin that makes us cringe and be so passionate about the lesser evil that we have learned to live with.

It turns out that God agrees — except that he doesn’t tolerate any of these sins. They cry out to heaven. Their cry should reach our hearts too.