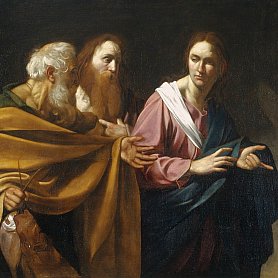 This Sunday’s Gospel (Third Sunday of Easter Year C) recaps Peter’s whole history with Jesus. The rest of the readings sum up his future.

It begins with Jesus reminding Peter of the day they met on the Sea of Galilee, when Jesus caused a huge haul of fish and Peter responded by saying “Depart from me, Lord, for I am a sinful man.” Then, Jesus reminds Peter of their meeting on the day he died, when Peter denied him three times in front of a fire — on that day, he literally became a sinful man pushing Jesus away.

Jesus reenacts these two moments. He repeats his command to cast the nets, letting Peter get a great haul again (this time, Peter doesn’t make the mistake of trying to pull them on his ship) and then he gives Peter a chance to accept him three times beside a fire.

It is up to Peter to do the next thing: Live his new life in Christ in an uncertain future.

The first reading shows Peter doing just that. He is brought before the Sanhedrin and refuses to stop preaching about Jesus. He no longer rejects God to impress men. Now, says the Gospel, he and the others “left the presence of the Sanhedrin rejoicing that they had been found worthy to suffer dishonor for the sake of the name.”

Peter and the apostles can do this because they are certain of the truth that John witnesses to in the second reading. God is king of the universe. He holds the future, and our lives, in his hands. John hears “everything in the universe, cry out: ‘To the one who sits on the throne and to the Lamb be blessing and honor, glory and might, forever and ever.’”

This Gospel is read at papal inaugurations and Pope Francis spoke about it at his own inauguration in 2013: “Jesus’ three questions to Peter about love are followed by three commands,” said Pope Francis: “feed my lambs, feed my sheep. Let us never forget that authentic power is service, and that the Pope too, when exercising power, must enter ever more fully into that service which has its radiant culmination on the Cross.”

These tales of Peter’s life have lessons applicable to all of us, not just popes.

In today’s Gospel, Jesus in his wounded but risen and glorified body asks Peter directly to put him first in his life, share his life with others, and change the direction of his life. Peter does. But Jesus does the same thing for us at every Mass.

First we confess our sins, and then he really appears before us, in the Eucharist, as if to ask: “Do you love me?” If we answer “Yes”, he says, “Come and eat,” and gives us the ability to live the kind of life the early Christians lived when we leave Mass.

And just like Peter discovered, when we take our Christian lives seriously and live them fully, difficulties will naturally follow. It’s unlikely that we will get dragged before an angry board for preaching the faith. But a version of this happens to anyone who insists on living his or her Christian life fully and speaking out charitably about what’s true. The court of public opinion — the key players in our social or work circle — might make it clear to us that we ought to shut up.

We hope we will be able to say to the court of public opinion what the apostles did: Sorry, but No. I will speak the truth. He leaves me no choice. And we hope we can leave their presence “rejoicing” at the chance.