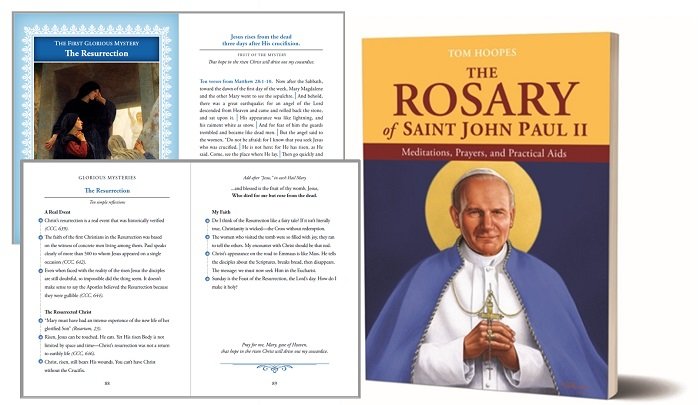 The First Glorious Mystery: The Resurrection

Jesus rises from the dead three days after his crucifixion.

Matthew 28:1-8 – After the Sabbath, as the first day of the week was dawning, Mary Magdalene and the other Mary came to see the tomb. And behold, there was a great earthquake; for an angel of the Lord descended from heaven, approached, rolled back the stone, and sat upon it. His appearance was like lightning and his clothing was white as snow. The guards were shaken with fear of him and became like dead men. Then the angel said to the women in reply, “Do not be afraid! I know that you are seeking Jesus the crucified. He is not here, for he has been raised just as he said. Come and see the place where he lay. Then go quickly and tell his disciples, ‘He has been raised from the dead, and he is going before you to Galilee; there you will see him.’ Behold, I have told you.” Then they went away quickly from the tomb, fearful yet overjoyed, and ran to announce this to his disciples.

The Second Glorious Mystery: The Ascension

Forty days after rising from the dead, Christ ascends into heaven.

Acts 1:8-11 – Jesus said to them: “You will receive power when the Holy Spirit comes upon you, and you will be my witnesses in Jerusalem, throughout Judea and Samaria, and to the ends of the earth.” When he had said this, as they were looking on, he was lifted up, and a cloud took him from their sight. While they were looking intently at the sky as he was going, suddenly two men dressed in white garments stood beside them. They said, “Men of Galilee, why are you standing there looking at the sky? This Jesus who has been taken up from you into heaven will return in the same way as you have seen him going into heaven.”

The Third Glorious Mystery: The Descent of the Holy Spirit

The Holy Spirit descends on Mary and the Apostles.

Acts 2:1-6, 38-41 – When the time for Pentecost was fulfilled, they were all in one place together. And suddenly there came from the sky a noise like a strong driving wind, and it filled the entire house in which they were. Then there appeared to them tongues as of fire, which parted and came to rest on each one of them. And they were all filled with the Holy Spirit and began to speak in different tongues, as the Spirit enabled them to proclaim. Now there were devout Jews from every nation under heaven staying in Jerusalem. At this sound, they gathered in a large crowd, but they were confused because each one heard them speaking in his own language. Peter said to them, “Repent and be baptized, every one of you, in the name of Jesus Christ for the forgiveness of your sins; and you will receive the gift of the Holy Spirit.”

The Fourth Glorious Mystery: The Assumption

At the end of her life, Mary is taken body and soul into heaven.

Revelation 12:1, 13-14 – A great sign appeared in the sky, a woman clothed with the sun, with the moon under her feet, and on her head a crown of twelve stars. … When the dragon [the rebellious angel, the devil] saw that it had been thrown down to the earth, it pursued the woman who had given birth to the male child. But the woman was given the two wings of the great eagle so that she could fly to her place in the desert, where, far from the serpent, she was taken care of.

The Fifth Glorious Mysteries: The Coronation

Mary is crowned queen of Heaven and earth.

Revelation 12:1-3, 4-5 – A great sign appeared in the sky, a woman clothed with the sun, with the moon under her feet, and on her head a crown of twelve stars. She was with child and wailed aloud in pain as she labored to give birth. Then another sign appeared in the sky; it was a huge red dragon, with seven heads and ten horns, and on its heads were seven diadems. She gave birth to a son, a male child, destined to rule all the nations with an iron rod.