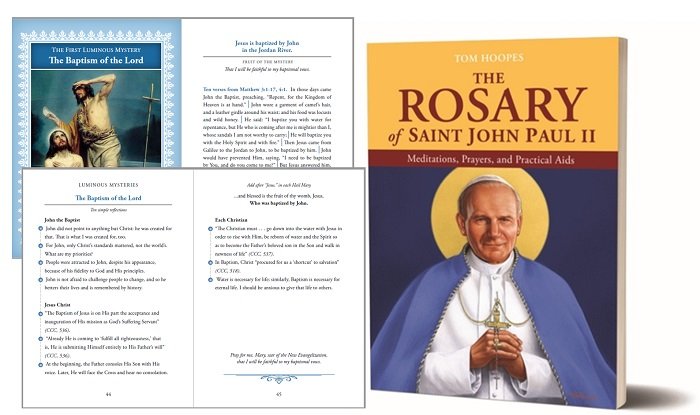 The First Luminous Mystery: The Baptism of the Lord

Jesus is baptized by John in the Jordan River.

Matthew 3:13-17 – Then Jesus came from Galilee to John at the Jordan to be baptized by him. John tried to prevent him, saying, “I need to be baptized by you, and yet you are coming to me?” Jesus said to him in reply, “Allow it now, for thus it is fitting for us to fulfill all righteousness.” Then he allowed him. After Jesus was baptized, he came up from the water and behold, the heavens were opened [for him], and he saw the Spirit of God descending like a dove and coming upon him. And a voice came from the heavens, saying, “This is my beloved Son, with whom I am well pleased.”

The Second Luminous Mystery: The Wedding Feast at Cana

Jesus performs his first public miracle at his mother’s request.

John 2:1-11 – On the third day there was a wedding in Cana in Galilee, and the mother of Jesus was there. Jesus and his disciples were also invited to the wedding. When the wine ran short, the mother of Jesus said to him, “They have no wine.” [And] Jesus said to her, “Woman, how does your concern affect me? My hour has not yet come.” His mother said to the servers, “Do whatever he tells you.” Now there were six stone water jars there for Jewish ceremonial washings, each holding twenty to thirty gallons.  Jesus told them, “Fill the jars with water.” So they filled them to the brim.  Then he told them, “Draw some out now and take it to the headwaiter.” So they took it. And when the headwaiter tasted the water that had become wine, without knowing where it came from (although the servers who had drawn the water knew), the headwaiter called the bridegroom and said to him, “Everyone serves good wine first, and then when people have drunk freely, an inferior one; but you have kept the good wine until now.” Jesus did this as the beginning of his signs in Cana in Galilee and so revealed his glory, and his disciples began to believe in him.

The Third Luminous Mystery: The Proclamation of the Kingdom

Jesus announces the coming of the Kingdom and forgives sins.

Mark 2:3-12 – Unable to get near Jesus because of the crowd, they opened up the roof above him. After they had broken through, they let down the mat on which the paralytic was lying.  When Jesus saw their faith, he said to the paralytic, “Child, your sins are forgiven.” Now some of the scribes were sitting there asking themselves, “Why does this man speak that way? He is blaspheming. Who but God alone can forgive sins?” Jesus immediately knew in his mind what they were thinking to themselves, so he said, “Why are you thinking such things in your hearts?  Which is easier, to say to the paralytic, ‘Your sins are forgiven,’ or to say, ‘Rise, pick up your mat and walk’? But that you may know that the Son of Man has authority to forgive sins on earth”— he said to the paralytic, “I say to you, rise, pick up your mat, and go home.” He rose, picked up his mat at once, and went away in the sight of everyone. They were all astounded and glorified God, saying, “We have never seen anything like this.”

The Fourth Luminous Mystery: The Transfiguration

Matthew 17 1-9 – After six days Jesus took Peter, James, and John his brother, and led them up a high mountain by themselves. And he was transfigured before them; his face shone like the sun and his clothes became white as light. And behold, Moses and Elijah appeared to them, conversing with him. Then Peter said to Jesus in reply, “Lord, it is good that we are here. If you wish, I will make three tents here, one for you, one for Moses, and one for Elijah.” While he was still speaking, behold, a bright cloud cast a shadow over them, then from the cloud came a voice that said, “This is my beloved Son, with whom I am well pleased; listen to him.” When the disciples heard this, they fell prostrate and were very much afraid. But Jesus came and touched them, saying, “Rise, and do not be afraid.” And when the disciples raised their eyes, they saw no one else but Jesus alone. As they were coming down from the mountain, Jesus charged them, “Do not tell the vision to anyone until the Son of Man has been raised from the dead.”

The Fifth Luminous Mystery: The Institution of the Eucharist

At the Last Supper, Christ changes bread and wine into his body and blood.

1Corinthians 11: 23-29 – For I received from the Lord what I also handed on to you, that the Lord Jesus, on the night he was handed over, took bread, and, after he had given thanks, broke it and said, “This is my body that is for you. Do this in remembrance of me.” In the same way also the cup, after supper, saying, “This cup is the new covenant in my blood. Do this, as often as you drink it, in remembrance of me.” For as often as you eat this bread and drink the cup, you proclaim the death of the Lord until he comes. Therefore whoever eats the bread or drinks the cup of the Lord unworthily will have to answer for the body and blood of the Lord. person should examine himself, and so eat the bread and drink the cup. For anyone who eats and drinks without discerning the body, eats and drinks judgment on himself.