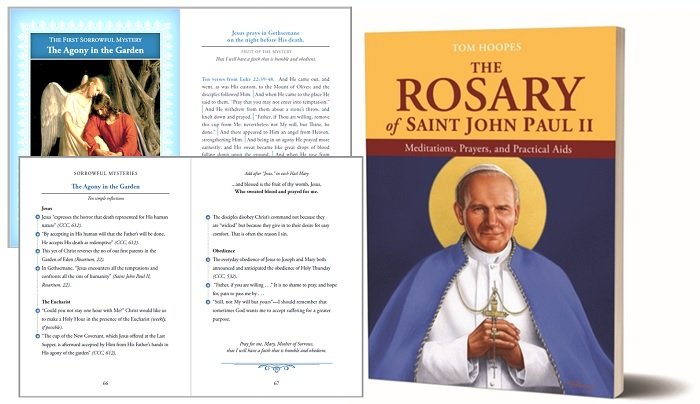 The First Sorrowful Mystery: The Agony in the Garden

Jesus prays in Gethsemane on the night before his death.

Luke 22:39-46 – Then going out he went, as was his custom, to the Mount of Olives, and the disciples followed him. When he arrived at the place he said to them, “Pray that you may not undergo the test.” After withdrawing about a stone’s throw from them and kneeling, he prayed, saying, “Father, if you are willing, take this cup away from me; still, not my will but yours be done.” And to strengthen him an angel from heaven appeared to him. He was in such agony and he prayed so fervently that his sweat became like drops of blood falling on the ground. When he rose from prayer and returned to his disciples, he found them sleeping from grief. He said to them, “Why are you sleeping? Get up and pray that you may not undergo the test.”

The Second Sorrowful Mystery: The Scourging at the Pillar

Christ is scourged by the soldiers at Pilate’s command.

Mark 15:6-15 – Now on the occasion of the feast he used to release to them one prisoner whom they requested. A man called Barabbas was then in prison along with the rebels who had committed murder in a rebellion. The crowd came forward and began to ask him to do for them as he was accustomed. Pilate answered, “Do you want me to release to you the king of the Jews?” For he knew that it was out of envy that the chief priests had handed him over. But the chief priests stirred up the crowd to have him release Barabbas for them instead. Pilate again said to them in reply, “Then what do you want me to do with the man you call the king of the Jews?” They shouted again, “Crucify him.” Pilate said to them, “Why? What evil has he done?” They only shouted the louder, “Crucify him.”  So Pilate, wishing to satisfy the crowd, released Barabbas to them and, after he had Jesus scourged, handed him over to be crucified.

The Third Sorrowful Mystery: The Crowning With Thorns

Soldiers weave a crown of thorns and place it on Christ’s head.

John 19:1-8 – Then Then Pilate took Jesus and had him scourged. And the soldiers wove a crown out of thorns and placed it on his head, and clothed him in a purple cloak, and they came to him and said, “Hail, King of the Jews!” And they struck him repeatedly. Once more Pilate went out and said to them, “Look, I am bringing him out to you, so that you may know that I find no guilt in him.” So Jesus came out, wearing the crown of thorns and the purple cloak. And he said to them, “Behold, the man!” When the chief priests and the guards saw him they cried out, “Crucify him, crucify him!” Pilate said to them, “Take him yourselves and crucify him. I find no guilt in him.” The Jews answered, “We have a law, and according to that law he ought to die, because he made himself the Son of God.” Now when Pilate heard this statement, he became even more afraid.

The Fourth Sorrowful Mystery: The Carrying of the Cross

Jesus struggles up Calvary with his own cross on his shoulders.

John 19:16-22 – Then he handed him over to them to be crucified. So they took Jesus, and carrying the cross himself he went out to what is called the Place of the Skull, in Hebrew, Golgotha. There they crucified him, and with him two others, one on either side, with Jesus in the middle.  Pilate also had an inscription written and put on the cross. It read, “Jesus the Nazorean, the King of the Jews.” Now many of the Jews read this inscription, because the place where Jesus was crucified was near the city; and it was written in Hebrew, Latin, and Greek. So the chief priests of the Jews said to Pilate, “Do not write ‘The King of the Jews,’ but that he said, ‘I am the King of the Jews.’” Pilate answered, “What I have written, I have written.”

The Fifth Sorrowful Mystery: The Crucifixion

Jesus is nailed to the cross and dies.

John 19:25-30 – Standing by the cross of Jesus were his mother and his mother’s sister, Mary the wife of Clopas, and Mary of Magdala. When Jesus saw his mother* and the disciple there whom he loved, he said to his mother, “Woman, behold, your son.” Then he said to the disciple, “Behold, your mother.” And from that hour the disciple took her into his home. After this, aware that everything was now finished, in order that the scripture might be fulfilled,* Jesus said, “I thirst.” There was a vessel filled with common wine.* So they put a sponge soaked in wine on a sprig of hyssop and put it up to his mouth. When Jesus had taken the wine, he said, “It is finished.” And bowing his head, he handed over the spirit. (John 19:25-30)