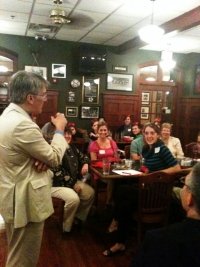 “Injustice anywhere is a threat to justice everywhere,” Martin Luther King Jr. wrote from the Birmingham jail. To fight injustice, America celebrated National Religious Freedom Day on January 16. In commemoration, US Commission on International Religious Freedom Robert P. George published an article calling President Obama and all Americans to further action for the protection of religious freedom around the world.

In his article on Religious Freedom, George wrote:

“As Jefferson’s statute proclaimed, religious freedom is among the “natural rights of mankind.” Yet to this day, billions of people abroad routinely are denied this liberty. From forbidding the construction of places of worship to perpetrating mass torture and murder, abusers continue to operate with impunity.

“To these ends, the US Commission on International Religious Freedom has recommended that the State Department designate as “countries of particular concern,” or CPCs, those nations the commission has found to be the world’s most severe abusers. Although meant to be an annual designation, the State Department last designated CPCs in July 2014. So we urge swift action.

“Among State Department-designated CPC nations, China and North Korea exemplify secular tyrannies that suppress religious groups across the board. Others, like Iran and Saudi Arabia, enthrone one religion or religious interpretation while often brutalizing those embracing alternatives, from dissenting Muslims to Christians to Baha’is.

“Pakistan is an example of an electoral democracy that both perpetrates and tolerates religious freedom violations. More Pakistanis are on death row or serving life sentences for blasphemy than anywhere else. …

“Among the most horrifying examples are in Syria and Iraq, where the so-called Islamic State has unleashed waves of terror against Yazidis, Christians, and Shia, as well as Sunnis who oppose its extremist views. In Syria, other extremist groups replicate those horrors ….

“In the Central African Republic, an explosion in strife between Christian and Muslim militias has destroyed nearly every mosque in the country.

“And in Nigeria, Boko Haram continues to attack both Christians and many Muslims who oppose them. …

“Standing for the persecuted is not just a moral imperative; it is a practical necessity for any country seeking to enhance stability and protect its security and that of its citizens.

“We should care deeply about this surge in religious freedom abuses and other human rights violations for humanitarian reasons and because of the tremendous instability these abuses unleash.”

You can read the rest of George’s article here.