Sts. Peter and Paul, Pray for Francis and Benedict 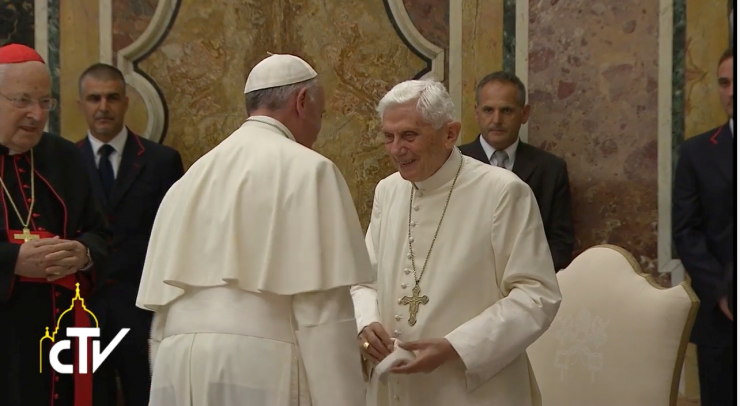 The feast day of Peter and Paul is a good day to pray not only for Pope Francis, who is continuing the work of both, but also for Pope Emeritus Benedict, who is a constant presence in the Vatican as well.

Pope Francis and Pope Benedict have spoken a lot about each other recently.

Benedict, at a rare public appearance with his successor, on the 65th anniversary of his ordination June 28, had beautiful words of thanks for his successor. “Your goodness, from the first moment of the election, at every moment of my life here, has struck me; it truly carries me, interiorly,” he said. “More than in the Vatican Gardens with their beauty, your goodness is the place where I live: I feel protected.”

Francis answered, “You, Your Holiness, continue to serve the Church.” He called Benedict’s Vatican Gardens monastery home “truly ‘Franciscan,’ whence emanates a calm, a peace, a strength, a trust, a maturity, a faith, a dedication and fidelity that do me such good, and strengthen me and the entire Church.”

The papal camaraderie links the two, who shared authorship of Pope Francis’s first encyclical, in a way that is reminiscent of January 29’s feast day: Saints Peter and Paul.

The two early Church leaders, Sts. Peter and Paul, share a June 29 feast because they were both martyred in Rome. But they have also come to represent two aspects of the Church’s leadership.

St. Peter represents the institutional Church — the Church that sets rules, governs its dioceses and attends to the doctrines and norms of the Church is the Church’s “Petrine” dimension.

St. Paul is the prime example of the missionary Church — the Church that goes out and adapts itself to different cultures, proclaiming the Good News, represents the Church’s “Pauline” dimension.

Of course, St. Peter also goes out, as the feast day’s first reading about his imprisonment demonstrates. And of course St. Paul also sets rules for the Church. The second reading at most Masses is an example of his governance of the local Church in Corinth, Rome, Ephesus and the rest, through letters.

Nonetheless, theologians such as Hans Urs von Balthasar see a significant difference in the Petrine and Pauline offices of the Church. Peter, in this Sunday’s Gospel, receives “the keys to heaven and earth,” and is told, “What you bind on earth shall be bound in heaven.” Peter is the Churchman par excellence. Paul, the tireless traveler who said, “Woe to me if I do not evangelize,” is the quintessential missionary.

Like Peter and Paul, the modern papacy also encompasses both missionary zeal and institutional duties.

One thing that Pope Francis and Pope Benedict have done together is to take the papal style of Pope John Paul II and make it the new norm for successors of Peter.

St. John Paul II traveled the world to preach Christ — but he also guided the Church through synods that set the course of the institutional church for decades to come. Pope Emeritus Benedict XVI was best suited to (and most loved to) focus on liturgy and choosing bishops, but he also traveled the world, from Africa to the Americas to meet his flock.

It was on a trip to South America, exercising his Petrine office, that Benedict inspired an Argentinian cardinal — Jorge Bergoglio — to show his own brilliance for Church governance. The Latin-American bishops produced the “Aparecida Document” under Cardinal Bergoglio’s leadership, a document that writers such as papal biographer George Weigel praised as a great sign of hope for the Latin-American Church.

Later, he would become Pope Francis and produce a similar document for the universal Church: the 2013 apostolic exhortation Evangelii Gaudium (The Joy of the Gospel).

Evangelii Gaudium is both practical and missionary: In it, Pope Francis combines frank advice for flailing parishes and dioceses with rousing calls to evangelize.

He defines the parish in a Petrine way: “The parish is the presence of the Church in a given territory, an environment for hearing God’s word, for growth in the Christian life, for dialogue, proclamation, charitable outreach, worship and celebration.”

He gives a Pauline purpose to the Mass: “The Church evangelizes and is herself evangelized through the beauty of the liturgy, which is both a celebration of the task of evangelization and the source of her renewed self-giving.”

He is very practical, providing a section called simply “The Homily” and another called “Preparing to Preach.” He is also inspirational, providing mission statements for Catholic elementary schools and universities and giving a list of “Reasons for a Renewed Missionary Impulse.”

In researching the upcoming book What Pope Francis Really Said I found that this same missionary style has been the cause of both the controversy and the successes that Pope Francis has had.

Pope Francis is not perfect. Neither were Peter and Paul. That is the point: In their ministry, we see God guiding his Church with a sure hand through weak instruments.

Sts. Peter and Paul, pray for us — and pray for Pope Francis, too. We know your brother Pope Emeritus Benedict is.