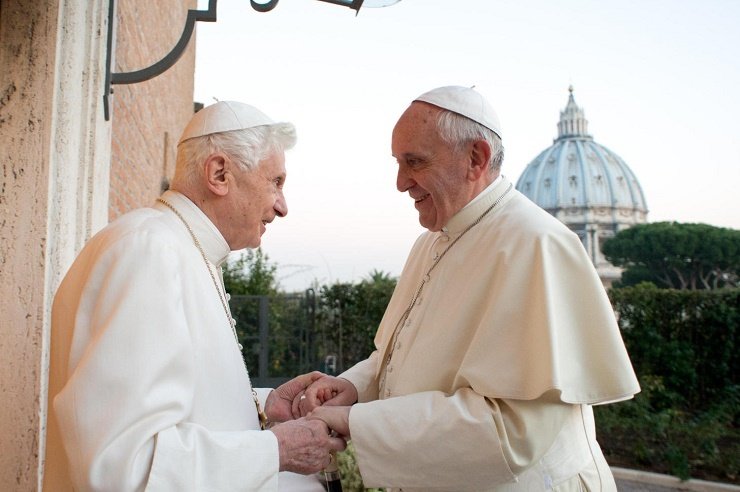 June is over and July’s in full swing—how’s that summer reading list coming along? Read any fiction that was aesthetically accomplished, gave you a challenge, and was supportive of your faith?

The Popes have consistently recommended such rare books. These novels don’t pander to the audience with feel-good sentimentalism or religious propaganda. Rather, they confront the reader with trials, encourage growth in Christ, and all the while show off the literary skills of master writers.

Even if you’ve read many of the books on this list, the Popes are fond of rereads. Like all great literature, these novels are worth revisiting—even multiple times.

The Betrothed by Alessandro Manzoni

Pope Francis has read this classic Italian romance three times and wants to read it again. The papal preacher, Fr. Cantalamessa, once quoted a line from it in a Good Friday homily. Pope John Paul II cited as exemplary its depiction of Gospel-inspired charity during the Milanese plague. Pope Paul VI wrote an official letter on the occasion of the 100th anniversary of Manzoni’s death. And, rumor has it, pastors use the novel for marriage prep.

The Brothers Karamazov by Fyodor Dostoyevsky

In an address last year to the Romano Guardini Foundation, Pope Francis focused on a passage from The Brothers Karamazov that helps us understand not only Guardini better, but God himself. Such has been the witness of many Popes to the great yet seemingly unwieldy literary classic that contains the famous “Grand Inquisitor” scene. Pope Benedict XVI mentions the novel in Spe Salvi as a counter-example to popular universalism. Pope John Paul II referred to it when answering a youth’s question about the suffering of innocents. To put it succinctly in the words of Pope Francis: “I love very much Dostoevsky.”

Diary of a Country Priest by Georges Bernanos

In a retreat he gave just a month ago, Pope Francis said that Bernanos’s novel, based loosely on the life of St. John Vianney, contains “beautiful paragraphs describing the [narrator’s] reflections” on unexpected trials. Pope Benedict XVI called Bernanos “a great French writer who was always fascinated by the idea of the Saints—he mentions many in his novels.” The book is a mainstay in Catholic fiction classes, and Bernanos himself continues to be a studied figure in politics, history, and literature, especially in his lively relationships with other great authors like François Mauriac.

At his papal inauguration, John Paul II called the novel a “magnificent literary expression” of Peter’s desire to escape Roman persecution. Twenty-three years later, a new Polish film version of the novel was made; it premiered at the Vatican with the Pope in attendance. “I only want to thank you for the careful way in which you produced it,” John Paul II said in his post-film address; “You respected Sienkiewicz’s masterpiece.” Indeed, Sienkiewicz won the Nobel Prize in Literature in 1905.

Lord of the World by Robert Hugh Benson

Pope Francis mentioned this early 20th-century apocalyptic novel in one of his homilies. Benson, who converted to Catholicism and wrote another novel depicting martyrdom, starkly warns against impending apostasy in Lord of the World, “as though he envisioned what would happen” in the aftermath of the wars. A couple years later during an interview, Pope Francis was more direct: “I suggest you read it,” saying that the book was an effective antidote to ideologies like secularism. Benson’s novel, in other words, helps teach us that “we do not negotiate our fidelity to God.”

We by Yevgeny Zamyatin

Okay, so this isn’t a direct papal endorsement, but Cardinal Paul Poupard, President of the Pontifical Council for Culture, has often spoken of how great literature helps us understand the dangers of technology divorced from the knowledge of religion. Cardinal Poupard finds We “a prophetic portrayal of human beings known by numbers rather than names, who had no awareness of belonging to each other or having any significance for each other.” The book set the stage for such dystopian classics as Orwell’s 1984. “These novels reflect perfectly the experience of people subjected to the highly mechanized life of modern industry.”

This article originally appeared at EpicPew.