Ten Inspiring Quotes from a Catholic in Government 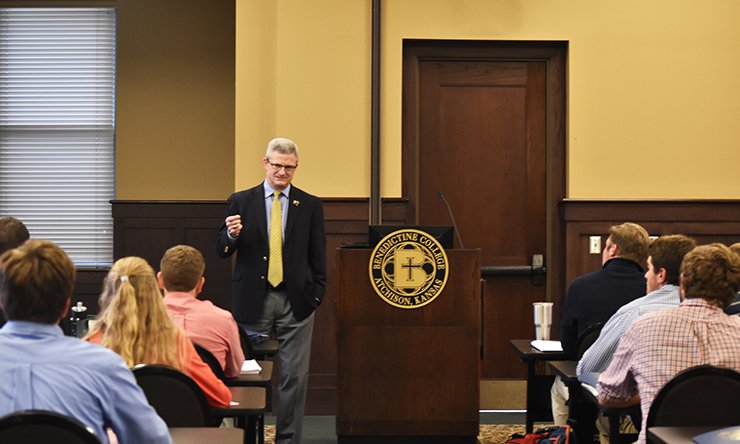 It is hard to imagine a more qualified speaker on living one’s Catholic identity in public life.

Timothy Steven Jeffries is a government official and successful entrepreneur who refuses to hide his faith.

Gregorian Fellows at Benedictine College heard from the Director of the Arizona’s Department of Economic Security last Monday.

He has an impressive resume: Prior to his cabinet appointment, Mr. Jeffries served in several high-level business and corporate positions. But what animates his commitment to his faith and to reaching out to those who are “broken and scarred” by life is his own personal history. His beloved big brother, Michael, was murdered in 1981 in one of the most gruesome murders in Colorado history, propelling Jeffries into the crime victims’ rights movement.

He has been married for 30 years to Dr. Mary Frances Jeffries, who also knows a thing or two about living one’s Catholic identity in public life as the headmaster of Archway Classical Academy Veritas, a Great Hearts Academy in Phoenix, Arizona.

Here are ten highlights from Jeffries’ address to Gregorian Fellows on Oct. 10.

“I carried hatred, deep-seated corrosive hatred for my brothers’ killers for 25 years. I hope you don’t have anyone in your life that’s worthy of that kind of hatred. But you all have heartbreaks and maybe you have some hatred. Get out of God’s way and let him heal you. Anger is one of the seven deadly sins for good reason.”

“Treasure every day. Whatever your darkness is, it will not be the only darkness in your life. Whatever it is, find blessings, find learning, and use that as a force of Good. The devil wants to tell you, you should be sad. You should be angry. Don’t listen to him.”

“I prayed the sorrowful mysteries for years and years, I couldn’t get out of them. I was saying, ‘Lord let this cup pass’ but I couldn’t get to ‘thy will be done’ – that holy pivot.”

“I’ve never been more vexed as an American. I’m a Patriot. I love this country. But America is in great peril. America’s existence is not guaranteed. Things are that dire. … But I take great hope. From the beginning, this is how Jesus rolled. He said, ‘Peter, come.’ One person. And we won.”

8: The Crisis of Men

“Our country desperately needs citizens like you. Desperately. God willing you stay in your faith and keep to your faith; I tell you your life will be easier if you do. But people will come after you. Take that as a sign you are doing the right thing. Blessed are the persecuted.”

“The poor and the suffering isn’t just picture book poor and suffering. You want to find someone who’s suffering? Stick around after church, and see who’s staying there. And know that they have a lot to pray for, and pray for them.”

“Tell people ‘God bless you.’ You’ll be amazed when more than a couple stop you and say, ‘No, God bless you!’ When we serve the poor and the sick and the suffering you’ll find that as much as you serve them, they serve you.”