The Fatherhood of Priests 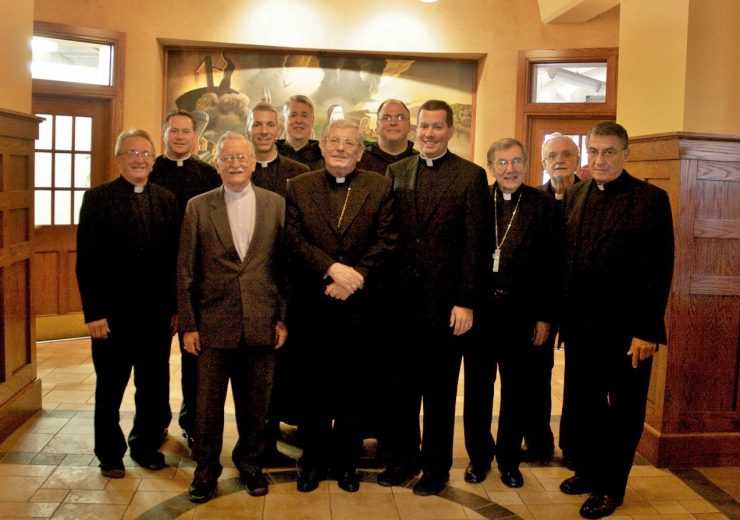 A group of Benedictine College priest alums in 2009.

Many of us will remember the other person who we call “Father” this Father’s Day: The priests who serve us.

Four priests taught me by their actions what the fatherhood of the priesthood is all about.

First was a priest we knew in Washington, D.C., who came to visit my family in Connecticut.

After dinner, we were chatting in the front room with Father when we heard the screeching of tires on the road outside and then a giant “bang!” Our house’s lights going out. Someone had crashed into an electrical pole.

He crossed traffic, rushed to the car’s side, and helped the four teens in the accident assess their situation, helped them out of the car, and called 911 from his cell phone.

Everyone was okay, thank God. But Father hadn’t run to the site to save their bodies: He ran to save their souls. He asked if any of them were Catholic and was ready to give absolution if anyone was dying.

Another priest performed the same function, but in a very different way.

My mom was growing weaker every day from ALS (Lou Gehrig’s disease) in November 2006.

She and my dad lived in a tiny Arizona town. The priest from a neighboring town would visit her periodically on his rounds.

After she lost her voice, she confessed to him via dry erase board. When she lost the ability to swallow, she received a sliver of a host to process in her mouth and her feeding tube.

We visited her in Arizona for Thanksgiving and stayed several days to keep flight costs down. The Sunday after Thanksgiving, I felt it was my duty to try to get anointing of the sick for my mother. The only Sunday Mass in town was celebrated at the fire station.

As the priest vested, I approached him and encouraged him to come and anoint my mother — please, as soon as he could. That afternoon, if possible.

He said he would, but then stopped and said he saw no reason not to give her the sacrament her right then and there. He started Mass late that day, after anointing Mom with oil and granting her absolution by the fire station door.

It is a good thing he did. She died the next day. The service and consolation that priest gave her, and her family, was irreplaceable.

Priest of the Poor

Another priest I will never forget also administered unexpected sacraments.

He was working in a small Mexican border town. I don’t remember how, but my brother and I ended up volunteering with him for one week in college.

This priest was a late vocation who had once been a university professor in California. He was a pro-life activist when he entered the seminary. He was sent to the hinterlands after serving in several parishes, but instead of bemoaning his outcast state, he began organizing catechetical groups and charitable outreach for his Mexican flock.

We witnessed him working from early each morning until late each night, and then we saw how his parish became a small village on Sunday. It exploded in music, vending booths and food.

There was not yet a culture of sacramental planning in the makeshift suburbia where he ministered, so on Sunday, he was prepared for anything. If a couple approached him dressed as bride and groom, he blessed the marriage they usually already had. If a small boy came in a white jacket, he gave him first confession and first Communion. You could see the deep appreciation these people — many of whom lived in tin shacks — had for this tireless priest.

But the greatest priestly action I have ever seen was at Mass on a hot summer Sunday at St. Mary’s Parish in New Haven, Conn.

This was back before the parish had air conditioning. It was tough for the congregation, but worse for the visiting priest who said Mass in the summer in his heavy vestments. “It’s hot for you,” he would joke. “But I’m up here wearing a horse blanket!”

This priest’s homilies were excellent, showing him to be a great student of Catholic social teaching, but the moment that is burned in my memory happened during the Eucharistic prayer.

He had diabetes and some kind of degenerative nerve disorder that made his hands shake. This Sunday, it also made him slow down through the first part of the prayer, like an old record player that needed to be cranked. When he started the consecration, it sounded like he was going to stop altogether.

But after he started the consecration, it quickly became clear that nothing could make him stop.

He took a long shuddering breath and looked like he wouldn’t recover. A parishioner ran to his side. The priest made it clear he wasn’t about to leave the altar, so the parishioner brought a chair for him to rest on.

The rest happened excruciatingly slowly“This … is … my … body … which will be … given up … for you.”

He lifted the host with shaky hands. We watched in rapt silence. He crept through “When the supper was ended, he took the cup …” And then a replacement priest had been brought over from the rectory.

But Father wasn’t about to stop halfway through the consecration.

Word after agonizing word, like he was fighting for life itself, he got to the end of the consecration. By then, an ambulance had come. After he elevated the chalice, he was carried away on a stretcher.

Then the replacement priest stepped up to the altar. “Let us proclaim the mystery of faith,” he said.

Talk about alter christus. Watching that priest was like watching Our Lord consecrating the Eucharist — from the cross. “Mom, why wouldn’t he stop?” the kids asked their mother in the car.

“Because he’s a priest,” said April. “That’s what priests do.”

When you really need a priest, any priest will do.

I remember when Cardinal John O’Connor of New York died. I was executive editor of the Register. We asked a priest who had known him for years to write a reminiscence. We were disappointed by what we got back. We expected memories of the charm and larger-than-life personality of the great archbishop of New York. Instead, we got an almost catechetical treatment of the role of the bishop and a dry pronouncement that Cardinal O’Connor filled that role perfectly. We ran it, but I didn’t understand why the priest would take that approach.

I understand now. Reducing a priest to his job description doesn’t short-change his importance; it elevates it. It means a priest is important not for how he is, but for who he is: A channel on earth for Jesus Christ’s saving action.

The priestly title “Father” means a lot more than the name that follows it — which is why I didn’t use the names of the priests in this article. A priest is far more than the force of his personality.

A version of this article appeared in the National Catholic Register.