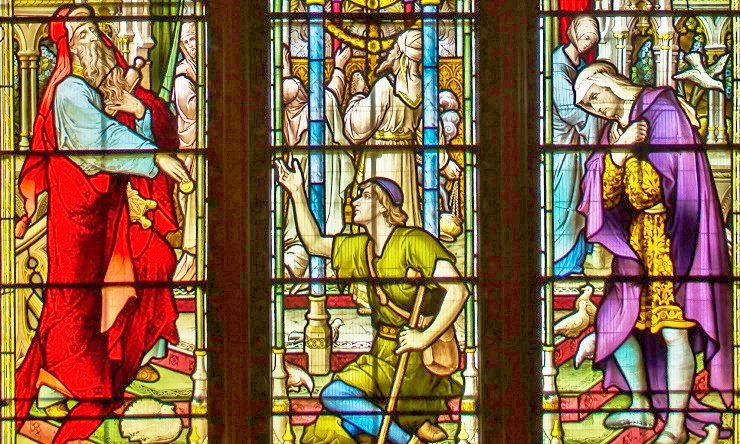 This Sunday (the 30th Sunday in Ordinary Time, Year C) continues the liturgy’s focus on prayer.

Jesus compares the self-centered prayer of a Pharisee that begins “O God, I thank you that I am not like the rest of humanity” to the humble prayer of a tax collector who beats his breast and says “O God, be merciful to me a sinner.”

Let’s face it: Our prayer is often more like the Pharisee’s than the tax collectors. We pray as if we are the center of the universe — our own universe, and God’s too. “Thank you that I am not like these others, for I at least go to Mass on Sunday. Heck, I even go on weekdays sometimes, too!”

This prayer can be an exercise in sour grapes: “Thank you that I’m not greedy like so-and-so” we say, perhaps because we haven’t been able to make as much money as so-and-so. This prayer can also come disguised as a petition when we pray “please help so-and-so convert” while we forget that we, too, need to convert.

When we pray this way, we think of ourselves as the teacher’s pet in God’s classroom. When Adam and Eve first ate the fruit, it was because the serpent promised they would be “like gods.” Ever since then, our predominant sin has been the sin of pride.

We are legends in our own minds. We are so impressed with ourselves that we close off the channels God has to reach us.

The Pharisee’s pride shows itself in three ways.

First, in God’s house he focused not on God, but on himself. If he had contemplated God’s greatness, he would have been drawn outside himself. Instead, by focusing on himself — on his own greatness — he mires himself in his own human mediocrity. Any rival god to the One God is an inferior, false god. Even when the rival god is someone as wonderful as me.

Second, he judged others. “Judge not, lest you be judged,” Jesus said. But the Pharisee placed himself in a position of judgment over the publican and “the rest of humanity.” He put himself in God’s place. It is hard enough to progress in the spiritual life; it is even harder if you have convinced yourself that you are godlike already.

Third, he compared himself to negative role models. Apart from his inability to judge others accurately, this is a totally unproductive way to approach any human effort. Imagine a runner who insisted on racing only against crippled opponents. He would never improve and his celebrations at the finish line would look absurd.

The prayer of the Pharisee should look absurd too — and so should our own prayers when we do a victory dance for God over our own imagined greatness.

This doesn’t mean we can’t acknowledge the spiritual success in our life. It means that we have to put it in perspective. Paul in the second reading also celebrates, saying, “I have competed well; I have finished the race; I have kept the faith.”

The crucial difference comes when he gives credit to God: “The Lord stood by me and gave me strength. The Lord will rescue me from every evil threat and will bring me safe to his heavenly Kingdom. To him be glory forever and ever. Amen.”

Paul knows that God “knows no favorites” as the first reading says, but that “the prayer of the lowly pierces the clouds.” Says the Psalm: “The Lord is close to the brokenhearted; and those who are crushed in spirit he saves.”

Today is a great day to start praying the tax collector’s prayer: Lord, have mercy on me, a sinner. Amen.