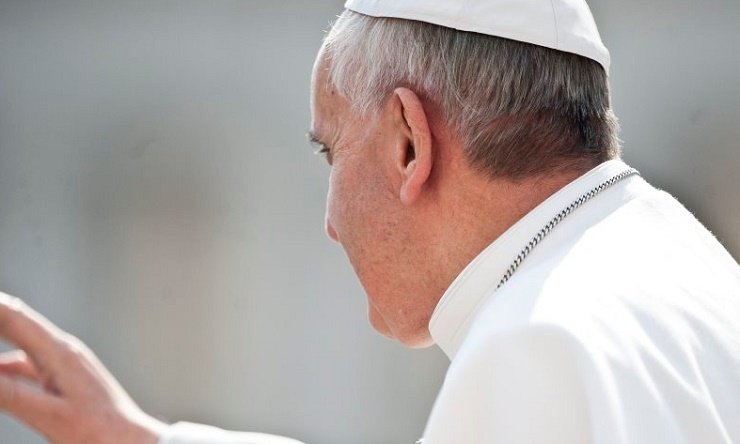 The future of the Church depends upon it.

My book, What Pope Francis Really Said, has started shipping and not a moment too soon, it seems. The book defends Pope Francis at a time when a lot depends on defending him.

The Church will win in the end, we know, but there is no guarantee that it will carry the day in the West in our century. That will depend entirely on our fidelity to the pope. Consider:

First: If we undermine the pope, we lose Church doctrine.

This is already happening, and has been for quite some time. Many things that Catholics believe about what the Church teaches are simply examples of what the media wishes the Church taught. And they persist because we let them.

Take the issue of communion for the divorced and remarried. Commentators are taking advantage of the pope’s ambiguity (and, yes, his lack of clarity is definitely part of the problem) to make sure his words are taken only one way. They want everyone to be certain that the Vicar of Christ wants to change two millennia of Christ’s teaching.

But as one defender of the Church’s teaching put it: “Those who think this is equivalent with ‘Catholic divorce’ are mistaken. Marriage is indissoluble when it is a sacrament. And this the Church cannot change. It is doctrine. It is an indissoluble sacrament.”

That defender of Church teaching is none other than Pope Francis himself.

Otherwise, we make the media the definer of our faith. And that’s a problem.

Second: If we undermine the pope, we won’t survive persecution.

Msgr. Charles Pope has given some excellent advice on how Catholics in today’s America should be preparing for persecution.

We do need to prepare, because persecution is coming, and it will either draw the Church out or drive it underground. Some Catholic cultures have grown or thrived under persecution — in many others, persecution all but eliminated the faith for centuries.

“Strike the Shepherd and the sheep will scatter,” said Jesus. The Catechism applies that verse to Christ as our ultimate shepherd (No. 764) and then to the apostles “with Peter as their head” (No. 765).

Today, it adds, “The Pope, Bishop of Rome and Peter’s successor, ‘is the perpetual and visible source and foundation of the unity both of the bishops and of the whole company of the faithful’” (No. 822).

If that is true, then there is no question whether or not the Church in the West will scatter under persecution: We absolutely will. Sheep who are actively engaged in undermining their own shepherd have, indeed, already begun scattering.

I would demonstrate that the papacy is an impediment to my brilliance, and that might work for a while. Eventually, though, I’ll end up far away from Jesus Christ. There is only one “perpetual and visual source of unity with him,” and it isn’t my personal brilliance.

Third and most important: If we undermine the pope, we will stop the advance of the Church.

For Catholics, Matthew 16:18 is papal apologetics 101. That’s where Jesus Christ says to Simon the fisherman: “I say to you, you are Peter, and upon this rock I will build my church, and the gates of the netherworld shall not prevail against it.”

Gates are a key metaphor. Gates don’t attack us, we attack gates. This verse makes the Church not a bunker of refuge from evil, but an army which roots evil out of all its hiding places.

What is our place in the attack? “Lay believers are in the front line of Church life … under the leadership of the Pope” says the Catechism (No. 899).

The world is falling into darkness, and Pope Francis is promoting human dignity, gender sanity, religious freedom, peace against terrorism, and, yes, marriage, in effective ways that can reach new people.

I totally understand why many of us feel uneasy with Pope Francis. But I feel blessed that I was given the opportunity by Servant Books to spend a year delving into What Pope Francis Really Said on each of these issues. After writing it I am confident that we do not have a weak, naïve, bumbling commander. We have a defender of the faith with a definite plan to advance even past the gains of John Paul the Great and Benedict the Theologian.

All he needs is a front line of Catholic lay people who believe Christ’s promise and back him up. I’m in. Are you?


This article appeared in Aleteia.