Hamilton fans had one dark cloud to contend with during the holiday season. Lin-Manuel Miranda, the genius composer and lyricist behind the musical, created an online contest. For a $10 donation to Planned Parenthood, you could enter to win Hamilton tickets at three different venues.

First, when Hamilton says not to give up on those in squalor.

The musical begins with this neat summary of the whole story: “How does a bastard, orphan, son of a whore and a / Scotsman, dropped in the middle of a forgotten / Spot in the Caribbean by Providence, impoverished, in squalor / Grow up to be a hero and a scholar?”

The story brims with hope. Planned Parenthood’s founder Margaret Sanger didn’t. She saw her organization as a way to purify the human race of undesirables doomed to squalor.

“Do not throw away your shot,” says Hamilton on several occasions in the musical.

“And do not throw away anyone’s else’s, either,” Pope Francis would add.

Francis calls abortion part of the “widespread mentality of profit, the ‘throwaway culture,’ which has today enslaved the hearts and minds of so many.”

Third, when Hamilton says to be mindful of everyone’s rights.

In the musical, Angelica Schuyler quotes the Declaration of Independence saying “all men are created equal,” then adds: “And when I meet Thomas Jefferson / I’mma compel him to include women in the sequel.”

She ought to compel Planned Parenthood, also. It ignores the right to life of unborn women (killing 6% of the new female population yearly) and covers up the sexual abuse of women.

Fourth, when the Hamiltons can’t wait to meet their son.

In the musical, pregnant Eliza tries to get Alexander to stay in New York “to meet your son.”

But Planned Parenthood offers no help with parenthood. They tell moms to #ShoutYourAbortion; not to #MeetYourSon.

Fifth, when Hamilton would give anything to bring his son back.

Later, after their son dies in a duel, Hamilton tells his wife: “If I could spare his life / If I could trade his life for mine / He’d be standing here right now / And you would smile, and that would be enough.”

It’s a poignant moment, because we have been right there with him, expecting Philip, loving the infant Philip, and now experiencing the pain of losing him.

The pain of abortion is just as real, and the women (and men) who suffer from it are remaining Silent No More. 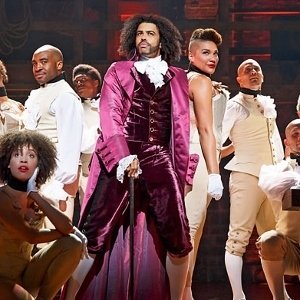 Sixth, when Hamilton warns about corruption …

Hamilton says “Corruption’s such an old song that we can sing along in harmony / And nowhere is it stronger than in Albany.”

Swap “D.C.” for “Albany” because that’s where Planned Parenthood Federation of America President Cecile Richards earns a whopping $590,928 a year.

Think of that: To enter to win Hamilton tickets, you needed to give $10. Planned Parenthood gets $8 of your money; the fundraising company gets $2.

Do the math: 73,866 contestants’ donations will do nothing but pay Cecile Richards’ salary.

That’s breathtaking corruption, and, yes, it saddens us to see Miranda singing along in harmony.

Seventh, when Hamilton argues against slavery …

In a Hamilton Mixtape rap that didn’t make the musical, Hamilton argues that slavery is a “stain on the soul of our Democracy.”

In fact, slavery defenders used the same arguments abortion defenders use today. The comparisons are uncanny.

And Planned Parenthood has made the slavery-abortion connection undeniable by admitting it changed abortion procedures in order to sell human beings.

Eighth, when Hamilton helps Washington “teach them how to say goodbye” …

It should have quoted this: “Of all the dispositions and habits which lead to political prosperity, religion and morality are indispensable supports.”

That’s the part Pope Benedict XVI quoted at the White House, warning that “a democracy without values can lose its very soul.” Values like the right to life.

“I established the first private orphanage in New York City,” says Eliza at the musical’s end. “I help to raise hundreds of children / I get to see them growing up.”

Of course, Planned Parenthood has the opposite approach. Rather than help poor kids, they eliminate poor kids. Africans resent them for this attitude. And when New Hampshire eliminated Planned Parenthood funding, Simcha Fisher spelled out who it is who really helps the poor.

Tenth, when Hamilton issues a rousing call to join the revolution of freedom …

Finally, I’ll end with these rousing words from Hamilton: “Raise a glass to freedom / Something they can never take away / No matter what they tell you.”

For us in the pro-life movement, disrespected by the establishment in the schools, media and federal government, this January is our time to “Rise up!” and overwhelm Washington once again at the March for Life.

Ignore us all you want. We won’t go away. We know the right to life is essential, and we won’t join you in pretending that it’s not.

The pro-life movement is like Hamilton’s Hercules Mulligan: “When you knock us down we get the [bleep] back up again!”