4 Reasons to Pray the Rosary … Every. Single. Day. 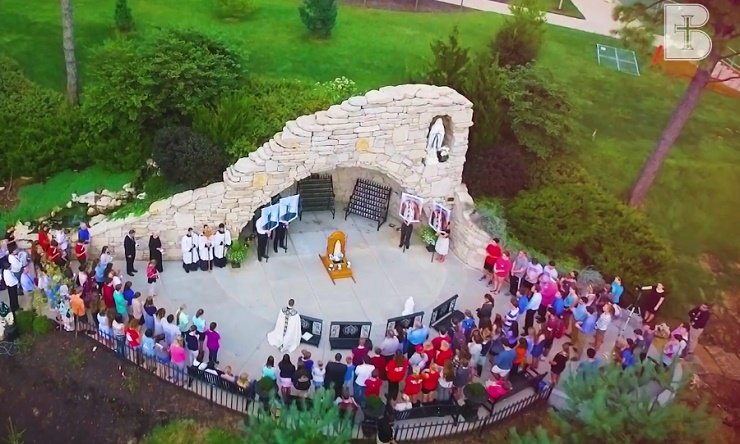 This year is the 100th anniversary of the visions at Fatima. Last week I pointed out that Fatima’s “conversion of sinners” message comes, providentially, a year after the Year of Mercy.

This week, I wanted to point out the vital necessity of the other major message of Fatima: Saying the Rosary daily.

My family has been saying the Rosary daily ever since my daughter, Cecilia, was nine years old. I was the editor of the National Catholic Register when she said, “Dad, in the paper you keep talking about how important it is to pray the Rosary. So why don’t we ever do it?’

We have been praying it ever since, and are so grateful that we have. This school year, Benedictine College has taken up the challenge and scheduled a daily Fatima rosary. Here are four reasons you should, too.

We have found over the years that when we pray the Rosary, we grow closer and stronger as a family —almost automatically.  This goes for partial rosaries (sometimes we only say a decade, or three), hurried rosaries, bored rosaries, in-the-car rosaries, distracted rosaries, or any rosary.

Why? St. John Paul II describes why in his letter on the Rosary: “To pray the Rosary for children, and even more, with children, training them from their earliest years to experience this daily ‘pause for prayer’ with the family … is a spiritual aid which should not be underestimated.”

The Rosary stops a busy family in its tracks, quiets the world’s noise, gathers us together and focuses us on God and not ourselves. This does wonders for a family psychologically and emotionally. But it does far more.

Second, the daily Rosary harnesses enormous spiritual power in our battle with sin.

It’s a lesson we forget again and again.  Our strength is not sufficient in the spiritual life.  We may think we are virtuous or good, but it doesn’t take much for an unexpected temptation to defeat us.

As the Catechism (and Gaudium et Spes) shockingly puts it: “man has to struggle to do what is right, and it is at great cost to himself, and aided by God’s grace, that he succeeds in achieving his own inner integrity.”

Scripture’s answer to this problem is the repeated injunction to “watch and pray.” If we hope to stand a chance in our Christian life, we need regular, systematic, focused time to reconnect ourselves to the spiritual strength of Jesus Christ, our Lord and Brother, and Mary, our heavenly Mother.

We need the Rosary.

Third, saying the Rosary is the single greatest thing we can do for the Church in trying times.

Pope Francis tells the story from when he was a bishop of joining a group that was praying the Rosary with St. John Paul II:

“I was praying in the middle of the people of God to which I and all those there belonged, led by our pastor. I felt that this man, chosen to lead the Church, was following a path back to his Mother in the sky, a path set out from his childhood. I understood the presence of Mary in the life of the pope, a witness he never ceased to give. From that moment, I recite the 15 mysteries of the Rosary every day.”

What Bishop Bergoglio saw was the leader of the Church drawing all the faithful together in a single act of worship and petition.  And it changed him.  There is great disunity within the Church today — real disunity, over substantial issues.  But the Rosary unites us with what we have in common — on our mission and purpose, on Jesus our Founder and Mary, our model. It also connects us to believers all over the world, as one army of prayer warriors under the Pope.

Fourth, saying the Rosary will save the world.

At Fatima, Our Lady said this directly: “Say the Rosary every day, to bring peace to the world.”

My own family’s dedication to the daily Rosary was supercharged after the Sept. 11, 2001, terror attacks, when John Paul II called for daily rosaries for peace. In his letter on the Rosary, he added a new, urgent petition for daily rosaries: For the family, under attack worldwide.

Even without all the benefits we personally gain from the Rosary, the daily Rosary would still be important to say because history has proven its power, from the Battle of Lepanto to the collapse of the Soviet Union.

Saying the Rosary isn’t easy, and there are ways to make it less of chore. But even when it is a chore, it’s worth doing. For ourselves, and for the whole world. Every day.