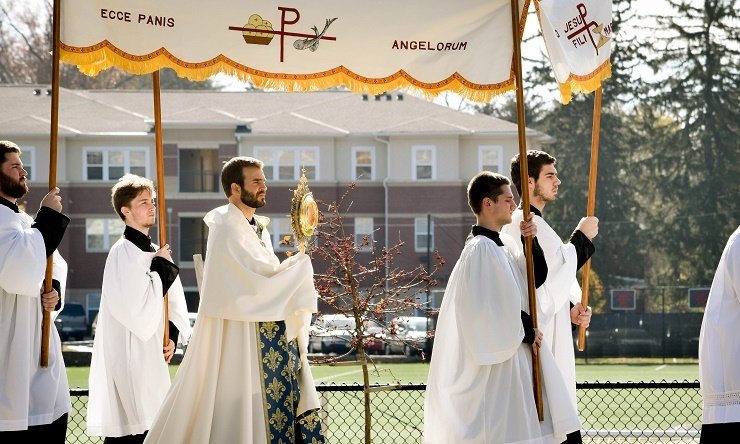 I know what I have been told: In the United States, interest in the Catholic faith is waning, and statistics of baptisms, Mass attendance, and priests and religious prove it. By that telling, the future of the Catholic Church is bleak.

But I also know what I have seen. My circle of friends — and the student body at Benedictine College, where I work — is filled with families who have rediscovered their faith. I see Catholic youth events overflowing and am thrilled by all the seminarians I see in ours and nearby dioceses.

I listed out some places where the Church has energy and growth, starting with the phenomena that hit closest to home for me.

1: College campuses have seen a counter-cultural increased interest in the faith. Newman centers are thriving. The Fellowship of Catholic University Students (FOCUS) capped years of growth by working with 25,000 students last year — up from 21,000 the year before, and an increase of 9,000, accounting for graduates, according to Curtis Martin in the organization’s 2016 annual report. FOCUS was founded at Benedictine College.

The board chairman of St. Paul’s Outreach is a Benedictine College alumnus, Bishop Andrew Cozzens. The organization’s 2016 annual report shows a 184-percent growth in student attendance at Bible studies, prayer events and retreats (2,300 students) over the past 10 years and 70 percent growth in reach on college campuses (17,000 students contacted through all the organization’s events).

2: ‘Newman Guide’ colleges. I asked Patrick Reilly at the Cardinal Newman Society if he sees a growth trend at the schools he recommends in his Newman Guide to Choosing a Catholic College. “Some of the undergraduate enrollment increases are just phenomenal, including 75 percent over seven years at Ave Maria University and 70 percent over five years at Belmont Abbey College,” said a statement he sent me. “Benedictine College has built 10 new residence halls in the last 10 years. Christendom, Holy Apostles, Northeast, St. Gregory’s, Thomas Aquinas and Thomas More are all seeing their best years in student numbers.”

3: Classical education — elementary and secondary schools with a focus on the great works of Western Civilization — has been on the rise for years. One article noticed “The exponential growth of Classical Christian Education” with students rising from hundreds to hundreds of thousands over the past two decades.

Traditional Catholic high schools are declining, but new classical schools are seen as an “in-demand product.” Places like the Institute for Catholic Liberal Education — where Los Angeles Auxiliary Bishop Robert Barron is a board member — are struggling to serve the growing market.

4: Home-schooling is another “education alternative” that has grown enormously, 61.8 percent in 10 years according to Department of Education numbers cited last summer  by Business Insider. The National Catholic Register saw the same trend in Catholic home schooling.

5: In the business world, there are signs of increased Catholic growth. Membership in Legatus has been rising steadily for 30 years. Legatus describes itself as “the world’s premier membership organization for Catholic business leaders committed to learn, live and spread the Catholic faith.”

Catholic Marketing Network President Alan Napleton said the organization is returning to Chicago for its annual conference this July. “Our exhibitor attendance was up 4 percent and store attendance jumped 8 percent,” last year, he said. Ken Davison, owner of Holy Heroes, which provides faith formation materials to Catholic families, told me “We see constant and accelerating increases in our email list.”

The National Catholic Youth Conference has grown steadily throughout its decades of existence — often by 1,000 or more a year — and now attracts 23,000 participants.

7: The renewal of the sacraments in general deserves notice here.

Eucharistic adoration has grown from availability in 715 chapels nationwide reported in 2005 to 1,100 in 2015. Pope Francis is promoting 24 Hours for the Lord events that combine opportunities for confession with Eucharistic adoration. The Economist noticed the Latin Mass’s popularity in 2012 and USA Today noticed it in n 2015. Meanwhile, the renewal of the English liturgy has transformed the Mass in its ordinary form, as well.

Fine — but couldn’t all of this be painting a false picture?

Yes, it could. The numbers in some cases may merely show increased activity in a shrinking remnant or they could reflect better marketing by a few institutions. But the number of indicators is impressive — and they aren’t the only signs of growth.

From 2005 to 2014, the number of Catholics grew faster than the population worldwide, according to the Vatican. In “America” (which includes North America and South America) the Catholic population grew 11.7 percent while the general population only grew by 9.6%.

What shape will the Church take in the future? It is growing in that direction already.