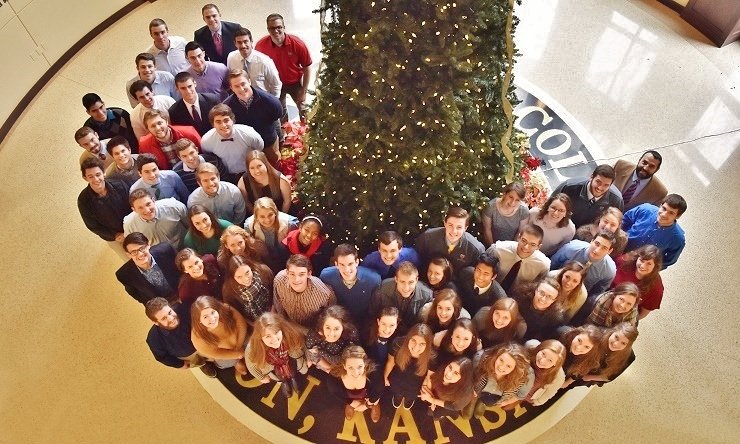 Benedictine College’s leadership program bid farewell to an impressive 2017 class April 23 — and gave them marching orders to change the world.

The Gregorian Fellows’ Senior Banquet celebrated the success students have had in all walks of life, from Rome to Honduras, from investment firms to parish initiatives, from lobbying in the United Nations to entrepreneurship at home.

Benedictine College’s Dean of Students Joseph Wurtz and President Stephen D. Minnis each addressed the students with the message that their role was to renew Catholic culture in America.

In his words to the students, Wurtz, who directs the Gregorian Fellows program, painted a picture of the world the students would enter.

“The world today is fractured into contrary resistance movements,” he said, “anti-Trump vs. anti-elites, haves vs. have-nots, EU vs. sovereign nation states, pro vs. anti-immigration, police supporters vs. anti-police protesters …. As Catholic leaders, how are we to understand this situation in light of the Gospel?”

He challenged the students he has led for four years, asking them: “Are you ready to join a different kind of resistance movement? If the ultimate contrary is the City of Man vs. the City of God, then how does one become a citizen in the City of God?”

(Click here to read Wurtz’s remarks in their entirety: “Contemplatives in the Heart of the World.”)

President Minnis praised the Gregorian Fellows program and listed the success of students.

“Dean Wurtz stepped up to develop a leadership program second to none,” he said. “This required a vision for a program that would support hand-picked students who would be committed to leadership roles at Benedictine College and beyond.”

Some of the examples he cited:

Students were each individually congratulated as they received recognition for completing the Gregorian Fellows program.

Noting that the banquet was taking place on Divine Mercy Sunday, Wurtz sent the students forth with a final word of encouragement.

“As you leave this special place with a special mission,” he said, “go out as contemplatives in the heart of the world, spreading divine mercy to all you encounter.”