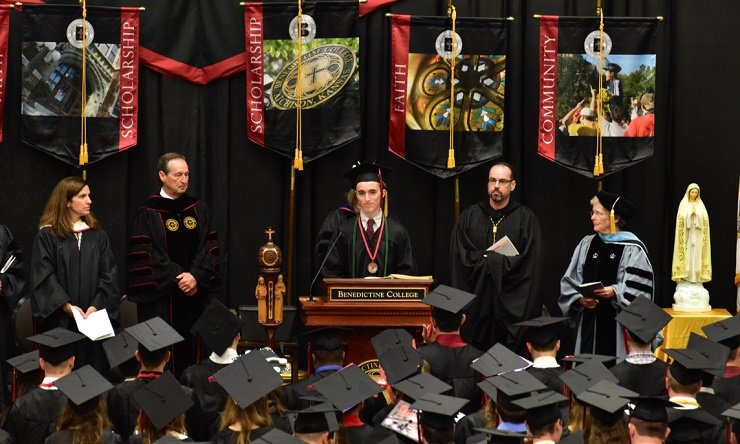 May 13, 2017, was Commencement Day at Benedictine College — but also the high point of the college’s year-long celebration of the Fatima Centennial.

While Pope Francis canonizes the shepherd children who saw the “Lady dressed in white” and received her message from heaven in Fatima, Portugal, Benedictine College will be graduating 440 students and will include Our Lady of Fatima in the celebrations.

“We wanted to celebrate the Fatima Centennial Day as well, and what better occasion than when we have so many students and their families in town for commencement?” Minnis said.

As part of the celebrations which began in August, the college has offered a daily Fatima Centennial Rosary at Mary’s Grotto on campus (watch), featured Fatima talks and instruction (web home), hosted a Pilgrim Virgin statue of Our Lady of Fatima for a 40-hours prayer event on Election Day (more), prayed the Our Lady of Fatima novena (here) and featured articles and tips on the message of Fatima at the college’s Gregorian Institute webpage (here).

Friday, May 12 — the Vigil of Our Lady of Fatima

4:00 p.m.During the college’s traditional March of Light ceremony, students left candles for Our Lady at Mary’s Grotto on campus. A statue of Our Lady of Fatima was part of the procession for this year’s March for Light.

After Baccalaureate Mass, the college’s Daily Fatima Centennial Raven Rosary was prayed at Mary’s Grotto. This Rosary concluded the college’s Novena to Our Lady of Fatima.

Saturday, May 13 — the Feast of Our Lady of Fatima

On the morning of commencement, a special Mass of Our Lady of Fatima was celebrated in the crypt chapel of St. Benedict’s Abbey. Those planning to consecrate themselves to Our Lady did do so at this Mass.

At Saturday’s Commencement Exercises, each student was given a Fatima medal blessed by Pope Francis who on this day plans to canonize Blessed Francisco and Jacinta at the Shrine of Our Lady of Fatima in Portugal.

A plenary indulgence is “a remission before God of the temporal punishment due to sins whose guilt has already been forgiven.” A Catholic can obtain an indulgence for himself, or for one of the poor souls in Purgatory.

There, a pilgrim should devoutly participate in some celebration or prayer in honor of the Virgin Mary. The elderly and infirm can pray in front of a statue of Our Lady of Fatima on the 13th of the month, May-October 2017.

While they do so, they must spiritually unite themselves to the jubilee celebrations. They must also “offer to merciful God with confidence, through Mary, their prayers and sufferings or the sacrifices they make in their own lives.”

As with any plenary indulgence, a pilgrim can receive only one indulgence a day and must:

Click here to visit the home page of Mary’s Grotto on campus.

Click here for information about the college’s Fatima Centennial Celebration.