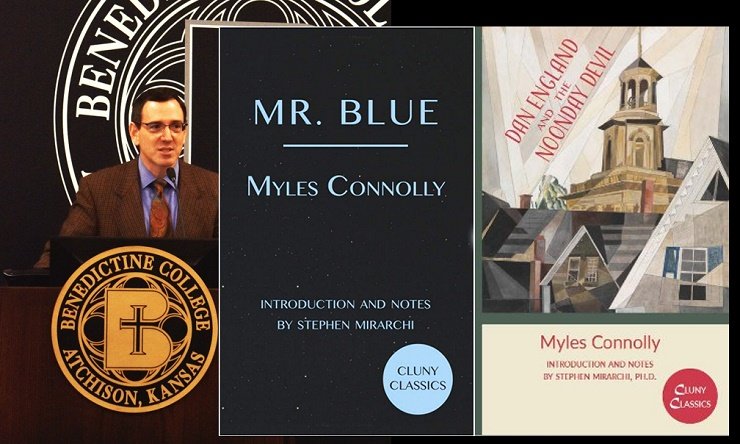 It isn’t often you get a chance to spend an hour talking about Catholic literature on the air. But that’s just what a Benedictine College did on WCAT radio.

Dr. Stephen Mirarchi (pictuerd at Benedictine’s Florence, Italy, campus), who specializes in recent Catholic literature, was the subject of the show “I Thought You’d Like to Know”with Bob Olson on May 15, 2017.

Mirarchi spoke about his work on the works of Myles Connolly (1897–1964), an author and a Hollywood screenwriter.

Mirarchi’s most recent critical edition of Connolly is last year’s Mr. Blue, but he also explained the role of Benedictine College in his work on Connolly’s Dan England and the Noonday Devil.

“I’m finishing my fourth year at Benedictine College in Atchison, Kan., and it’s a wonderful place to work. One reason is that there is so much intellectual stimulation going on here,” he said.

“At one point in Dan England and the Noonday Devil, Dan England is telling a story about Aquinas. And he mentions the famous Orvieto miracle that occasioned the famous Corpus Christi Mass that Thomas Aquinas wrote. The Mass and the office.”

Try as he might, Mirarchi couldn’t track down the source Connolly used in his book.

“So I emailed the head of our philosophy department, Jean Rioux, and said ‘Jean, what’s the deal with this?’ Jean said ‘Hmmm — why don’t you look here?’”

It took more digging, but with Rioux’s help, Mirarchi found the probably source.

“We had uncovered the mystery. I was very thankful that I have people that care about this stuff so much that we want to help each other figure these things out. That’s one thing that makes Benedictine so wonderful.”

Mirarchi said he became interested in the Dan England book because of an Ignatius Press book, The Noonday Devil: Acedia, the Unnamed Evil of Our Times.

Benedictine Abbot Jean-Charles Nault describes acedia — which he links not just to laziness but to burn-out, bored curiosity, and lack of ambition — and says “It is perhaps the cause of the greatest crisis in the Church today.”

The name of the spiritual malady comes from the difficulty the Desert Fathers had in being faithful at the noon hour, when they are most likely to relax their bodies — and their guard. The best remedy is in giving oneself to God and neighbor, writes Mirarchi.