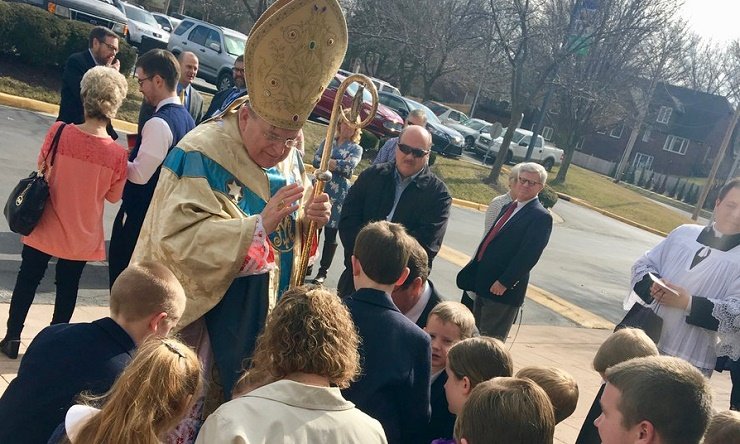 Cardinal Raymond Burke focused on suffering and the sick when he visited Kansas and Kansas City, Mo., last week.

That is what Lifesite news reported in its story, “No stopping Cardinal Burke during busy U.S. visit.”

The report quoted Burke’s homily from Feb. 11, the World Day of the Sick and Our Lady of Lourdes feast day, at the annual White Mass for the Catholic Medical Association (CMA) of Kansas City.

“In a world which views illness and death as denial of the meaning of life and as annihilation,” the cardinal is quoted saying, “our faith teaches us that our suffering and death, united with the suffering and death of Christ, express our deepest love and ultimately issue in life — the eternal life of heaven.”

Burke is the Cardinal Patron for the Sovereign Military Order of Malta. The Mass for the Healing Professions was planned by the Kansas City-area CMA and took place the day after a Knights of Malta-sponsored a Defense of the Faith lecture by Cardinal Burke at a local Catholic high school.

Lifesite said the visit was positive and warm.

“The outpouring of support was really amazing,” Dr. Paul Camarata of the Kansas City CMA told the news site. Camarata, the neurosurgeon who hosted Cardinal Burke, was granted an honorary doctorate by Benedictine College in 2014.

The cardinal was joined by local ordinaries, Kansas City, Kansas, Archbishop Joseph Naumann and Kansas City-St. Joseph Bishop James Johnston as concelebrants at the Church of the Nativity in Leawood, Kansas. Relics of St. Gianna Beretta Molla (1922-1962), a physician who gave her life to save the life of her unborn child, were venerated at the Mass.

“He visited a theology department senior seminar whose studies on ‘Amoris Laetitia In the Light of the Catholic Tradition’ have included the book written by five cardinals in response to the Extraordinary Synod on the Family,” said the report.

Students “were thrilled when they heard the cardinal was coming,” Camarata told Lifesite news. “And I think it was a boost for him coming to see them.”

The report said Burke “also met with about 100 students from the College’s Gregorian Fellows Program, along with 15 monks, passing around holy cards he brought for them.”