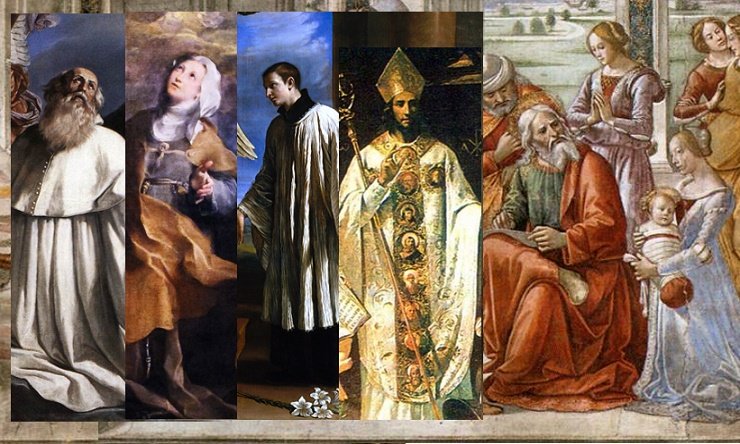 June 18 is Father’s Day in America, and it is important to celebrate fathers particularly in the face of the crisis of fatherlessness.

But the Church is well aware that not every family is a beautiful unity of a father, a mother and children. This Father’s Day is followed by a week of saints from imperfect families.

As a 20-year-old, Romuald witnessed his father kill a man in a duel. The sight shocked and alarmed him, and so he went to a Benedictine monastery to do penance for his father. There, he was so impressed with the monks that he joined the monastery.

When Romuald’s father a few years later came to see how his son was, he was so struck by holiness of the monks in the monastery that he also joined.

June 20 is the feast of Blessed Michelina (1300-56), a saint for fatherless households.

After losing her husband when she was 20, Michelina reacted badly to the stress. She began to lead an irresponsible lifestyle of parties and fun. Her conscience started to get to her, though. She realized the fun was leaving her empty — and that she was leaving her son all alone.

Under the care of a spiritual director, a Franciscan lay woman in her town, she began praying more and looking after her son. She abandoned her party lifestyle and changed her wardrobe. Her life changed so drastically that her family was worried — but not for long.

When she died at age 56, the people of Pesaro kept an honor lantern lit in Michelina’s house, and 25 years later turned the house into a Church.

June 21 is the feast of Italian St. Aloysius Gonzaga (1568-1591) who is a saint who shows the benefits priestly fatherhood can have.

His father had designs to make him a soldier, and reacted angrily when the boy wanted to enter the religious life. It took him years to pester his father into giving in.

Once in the seminary, he followed new fathers: St. Charles Borremeo and, later, St. Robert Bellarmine.

“I am a crooked piece of iron,” he said, “and am come into religion to be made straight by the hammer of mortification and penance.”

In 1591 he did just that when a plague struck. He tirelessly served victims, though his spiritual director later said that Aloysius had a strong revulsion to the sights and smells of the work.

The Jesuits insisted that their young seminarians stop serving plague victims, but young Aloysius kept pestering them for permission — just as he had his own father — until they gave in. He got sick and died at age 22.

June 22 is the feast of St. Paulinus of Nola (353-409), who started out as a well-educated married man who did well by himself as a lawyer and poet in southern Europe.

He entered the Church at age 36 and he and his wife, Theresia, had one son. When their son died, however, the two began to look at life in a much more serious way. They gave everything they had to the poor, and spent their time praying and sacrificing for Christ. Eventually, the two took a vow of celibacy and Paulinus became a priest.

The couple served the poor together until, in 409, Paulinas was made a bishop.  St. Ambrose, St. Augustine, St. Jerome and St. Martin of Tours were contemporaries of his who praised his service as a bishop — which all began because he was inspired by the death of his son.

Finally, June 24 is the feast of the birth of John the Baptist — whose family was famously dysfunctional in one particular way that had to do with John’s birth.

Zachariah was the great saint’s Father. When the Angel Gabriel appeared to him and told him that his wife would give birth to a son despite her old age, and asked him to name him John. Zechariah wouldn’t believe it — so he was struck dumb.

It was only after the child’s birth that he wrote “His name is John” and the curse was lifted.

John the Baptist is a good saint to pray to against the crisis of fatherlessness.

When Gabriel announced the birth to Zechariah, the angel said John would “turn the hearts of the fathers to the children.”

St. John the Baptist, pray for us. Turn the hearts of fathers to their children once again. Amen.