Fatima: A New Miracle and a New Mission 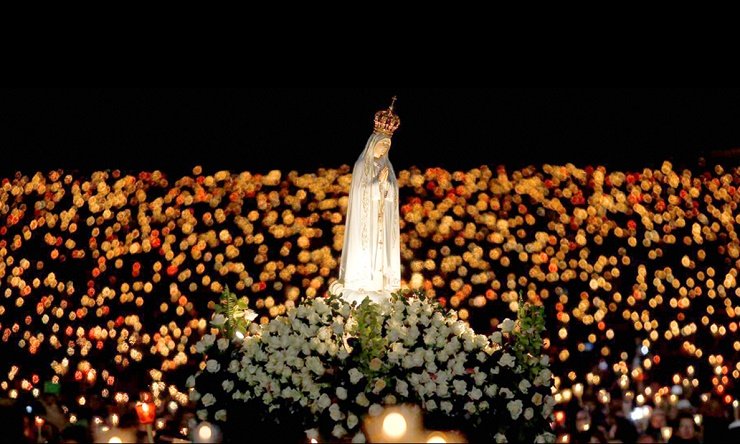 The Oct. 13, 1917, miracle was like a miracle from the Gospels. Mary had been there for the Star of Bethlehem and the Good Friday Eclipse. Now she was there for the Miracle of the Sun.

“The silver sun … was seen to whirl and turn in the circle of broken clouds,” reported the newspaper of Lisbon, Portugal. “People wept and prayed with uncovered heads, in the presence of a miracle they had awaited.”

The Miracle of the Sun in Fatima, Portugal, and was witnessed by tens of thousands of people.

Even unbelievers saw it.

One of those witnesses was a professor of natural sciences from a nearby university. He described the miracle this way: “The sun, whirling, seemed to loosen itself from the firmament and advance threateningly upon the earth as if to crush us with its huge fiery weight.”

The crowds of people screamed in fright, he said. But then they cheered with joy. They were not crushed by the sun. Instead, their hearts were transformed by one of the most powerful public miracles of all time.

And in the center of that crowd were three little shepherd children: Francisco and Jacinta Marto and their cousin Lucia dos Santos.

A little more than a year earlier, an angel was sent three times to visit shepherd children in a small town in Portugal, to prepare the way for a “Woman clothed with the sun” (Revelation 12) who would follow.

Heaven is inviting everyone to join in a mission as old as the Gospels and as new as each of us — if only we will listen.

The story of Fatima is the story of a concerned mother eager to protect her children and tell them that everything will be all right.

“You will have to suffer a lot, but the grace of God will be your comfort,” Our Lady of Fatima said to the children. She also told Lucia: “Don’t be discouraged, I will not abandon you ever. My Immaculate Heart will be your refuge.”

She also predicted how the story will end: “In the end, my Immaculate Heart will triumph … and a time of peace will be granted to the world.”

That is good news. Our mother wants us to be safe—and she says everything will be alright.

“Father … to you I offer praise; for what you have hidden from the learned and the clever you have revealed to the merest children.” (Matthew 11: 25).

Why did Our Lady of Fatima reveal the secrets of heaven to three ordinary shepherd children? The reason is clear. Jesus, Mary and St. Joseph see children as supremely important—and they have a special mission for them.

The great men and women of the world have always concocted their plans, but children have always quietly carried the day—from the hidden Jesus in the manger to the shepherd children of Fatima, from the martyred children of Rome to today’s new Franciscos and Jacintas.

A Call to Faith …

Alone we can do nothing. With God, nothing is impossible. Heaven entrusted three small children with so much: New prayers. New devotions. A vision of eternity that would inspire millions. A mission to change the world.

Then, she confirmed it with amazing signs and wonders that caught the whole world’s attention, to increase our faith in the great love and beautiful destiny God has planned for his world.

Take up the offer of Our Lady of Fatima. Console Jesus, convert sinners, and embrace your Mother. She wants what is best for you.

Adapted from the Fatima Family Handbook by Tom Hoopes.